A publicly-traded Chinese company that recently caught the crypto bug has purchased additional BTC and Ether worth millions.

Meitu (SEHK: 1357p, a Chinese company that creates a photo editing app, announced today that it has bought an additional 16,000 units of Ether worth $28.4 million under the Ether Acquisition and  386.0858 units of Bitcoin at an aggregate price of US$21.6 million.

Less than two weeks ago, the Hong Kong Stock Exchange-listed company made its debut investment in crypto after buying 15,000 Ether worth $22.1 million and 379.1214 BTC valued at $22.1 million at the time.

The company has spent a total of $90 million in BTC and Ether.

Apart from the ongoing bull cycle that has seen bitcoin top $60K and Ether surpass $2,000, Meitu has offered a slew of reasons as to why it considers bitcoin to be suitable for its asset allocation strategy.

The company further said that the digital asset can be easily exchanged for fiat or goods and services.

Meitu said bitcoin has several features that enable it to be a good store of value with its finite supply being the main reason.

Bitcoin was programmed to have a limited supply of 21 million coins that will only be fully mined in 2140.

The asset’s limited supply is one of the main drivers why bitcoin proponents think its value will increase as supply decreases.  In recent times, the demand for bitcoin has outweighed supply, propping up the asset’s price to new highs.

This reduction in supply amid an aggressive increase in monetary supply has made bitcoin a superior asset, the company claims.

These features potentially make bitcoin a ‘superior’ store of value compared with other forms such as “gold, precious stone, and real estate.”

“Being an alternative store of value, its price is primarily a price of future demand that is driven by consensus of investors and the general public.”

Meitu’s view on bitcoin investment is shared by several listed companies that have invested in BTC, with Tesla and Microstrategy leading the race.

Unlike the 2017 bull cycle that was immediately followed by the so-called “crypto winter,” Meitu’s board sees growing momentum in the market.

Meitu’s thesis on bitcoin partly lies in the fact that traditionally conservatives institutions such as insurance companies are investing in cryptocurrencies while asset managers are launching crypto funds.

Further, it is becoming easier to access cryptocurrencies and regulators are starting to license cryptocurrency trading platforms.

These factors, as Meitu points out, make the case for investing in cryptocurrencies stronger.

Meitu’s share price is down 3.78% in the last 24 hour-trading period, TradingView data shows. 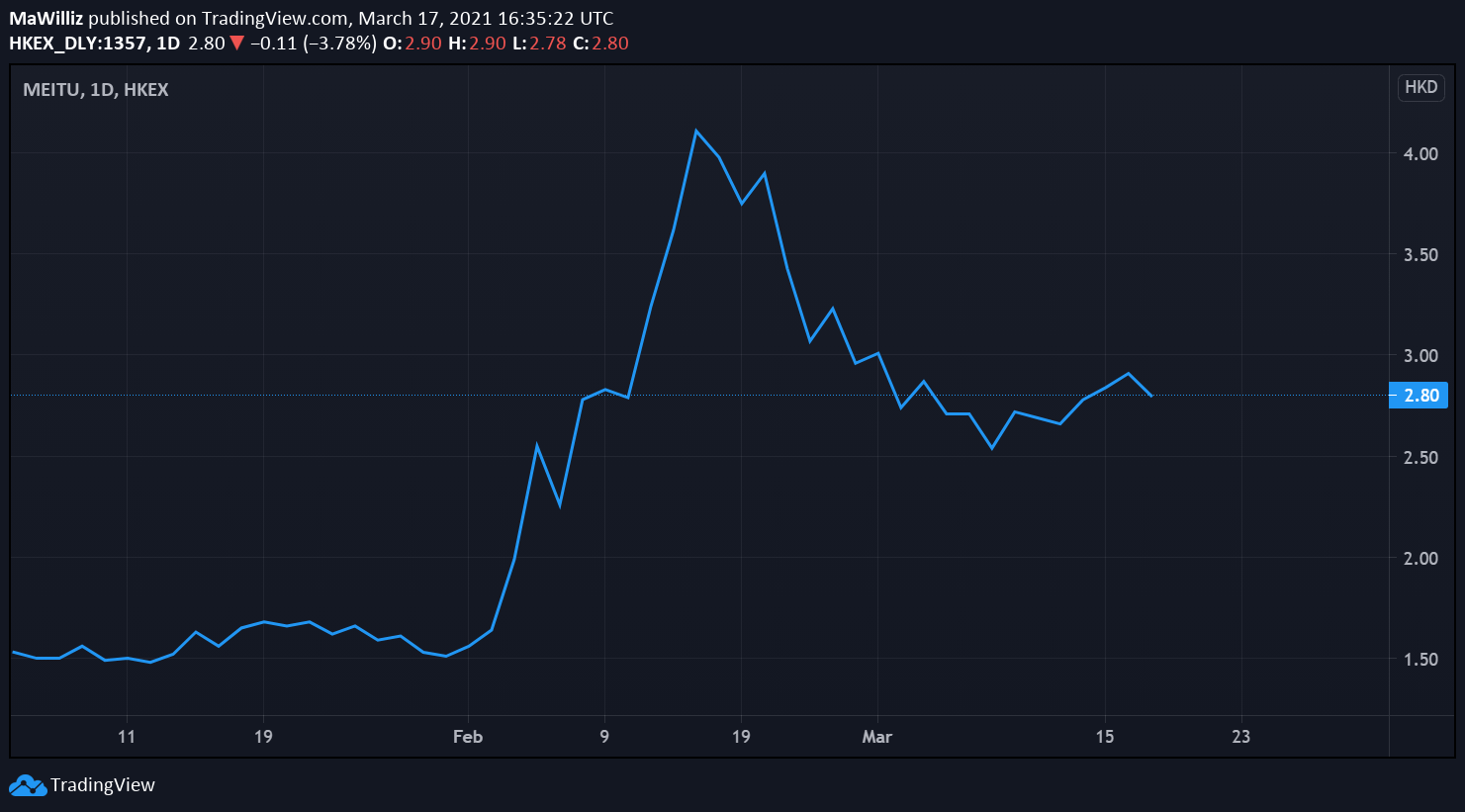 Boxer Floyd Mayweather to launch his NFTs this month