Stepn’s NFT game is supposed to help you get in shape, make money, and take care of the environment… simultaneously, may I add.

Let’s break this down super simply before diving in.

The game is called STEPN. Its ticker symbol and native token is GMT. The in-game currency it uses is a token called GST (which stands for green satoshis). All of these work together in the following way:

The gamification of health and fitness

First and foremost, STEPN is a game. It’s a game that aims to make players take action. Its primary objective is to get people to exercise. To do this it uses 2 incentives.

The first is financial. Users interact with the app and exercise to earn rewards. That’s the financial incentive. You move, you earn money. Simple.

Secondly, the app allows users to virtue signal. This means users can feel good about using the app and brag to their friends about doing so. By using the app they are contributing towards a cleaner, friendlier environment. This not only helps people physically but also, in theory, has a positive impact on the environment. This is genius marketing because who doesn’t want to brag about being a good person. (From personal experience, I’ve already seen multiple people share their usage of the app on social media).

How does STEPN help the environment?

STEPN claim to use profits earned to buy Carbon Removal credits. Think about a company reducing their carbon footprint by buying up carbon credits to balance out its carbon footprint. If they produce 1 million tonnes of CO2, they can buy 1 million tonnes worth of carbon credits and claim to be carbon neutral. Sometimes this money is used to actually remove the carbon from the air, and sometimes it’s used to encourage other companies to not produce the carbon. Some interesting economics and politics are at play here.

Within the game, different shoes offer different rewards. It’s like powered-up weapons in a game. Some shoes will earn GST faster, other shoes will help you level-up faster. The team have clearly studied game design very closely and taken the best practices from many games of the past decade and combined them into this lifestyle app.

There are also multiple game modes, leaderboards, level systems and more that are being used to attract users. Right now the key mechanic is a single-player mode. However, there are plans to add multiplayer, marathon, and sprint modes.

How to partake and play?

There’s no better way to understand the game mechanics of STEPN than by downloading it and trying it for yourself. The app is available for download right now on both Android and iOS. It has gone from its inception to the beta version in only 5 months. After its successful IDO in March 2022, STEPN plans to optimize its in-game features and launch on several other chains in the future.

For research purposes, I have downloaded the app, but I haven’t run with it yet. Do I intend to? Maybe, but even as someone already interested in athletics, I’m not sure the ability to virtue signal, and earn a few dollars is enough to convince me to put time into the app. That’s key and interesting, as it shows even though the concept seems very idealistic, it doesn’t mean it will translate. Humans arent always logical, and there are no certainties that even with real incentives, people will adopt the app.

So there are a lot of people who can’t get into the app. This may be good right now as there is little supply and high demand. But will people get tired and give up? Who knows.You can also get different kinds of trainers- for walking, jogging, running and training. So, you don’t need to be a runner to participate in Stepn. 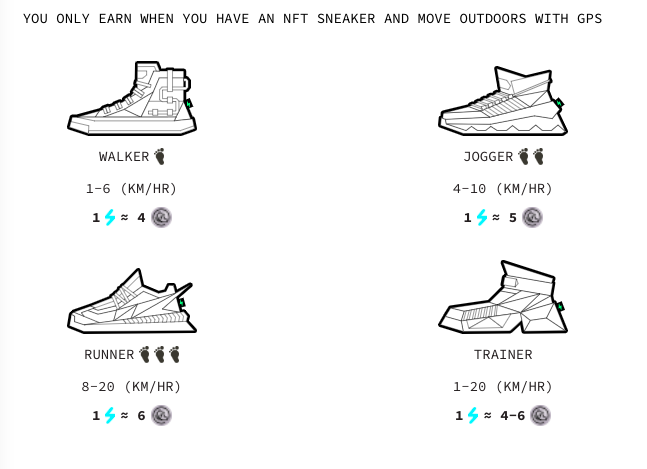 “What if I cannot afford a pair of sneakers?” Sneakers will soon be available to rent from other players, so that you do not need to actually buy the NFT. You borrow another player’s sneakers, and then split the profits (the smart contract will distribute earnings based on the rental agreement) after the length of rent (anywhere from 1-7 days).

“Can I just quit my job and do this all the time?” No, the trainers actually need recharging so the rewards you can earn are capped. You also have to pay for ‘shoe repairs’ at around $25 per repair.

The Tokenomics of STEPN

STEPN has 2 tokens, its main in-game token is called GST and is earned as a reward through the app. GMT is its governance token, which holders use to vote and guide the direction of the project.

GST has an unlimited supply and is the app’s currency that users earn for movement. However, it does have multiple burn mechanisms to disincentivize inflation, such as minting or repairing sneakers, levelling up sneakers, and upgrading gems. This is used to control the overall supply.

GMT is earned after users reach a certain level. The total supply is 6 billion with the following distribution”

The total release of GMT is halved every 3 years. Private and team sale tokens are subject to vesting, which does not start before 2023.

The proof of movement dilemma

How can STEPN guarantee that people are moving? One of the most understood things in the gaming industry is games are made to be broken. Remember when you’d hit a 7 button sequence on GTA and spawn a fighter jet? Well, many other games have tried to incorporate features like movement trackers and have also struggled. Pokémon GO, for example, is one of the most successful games of all time encouraging millions of people all over the world to get up and walk. However, at a certain point players began finding loopholes and circumvented the move mechanic.

STEPN claim to have fixed this issue. But more clarity is needed on this. If you see anyone driving down your road at a snail’s pace looking at their phone, they may be trying to earn some easy GST.

It’s necessary to note here that this model is largely unsustainable in the long term. And, as all reward payouts come in the form of the native GMT token through inflation, it’s really a game of musical chairs. Renting does offer more runway but AXS itself is proof of this model’s unsustainability.

Have you checked out STEPN? If so what do you think, comment below.