Vechain, the 28th ranked cryptocurrency by market cap is one of the most prominent projects in the crypto commercial sector. With a current capitalisation of $400M, VET is down 51.94% since its launch and down 74% since it’s all-time highs at $0.018.

Founded in 2015, the project is focused on enhancing global supply chains by using blockchain technology. VET’s structure is used to support manufacturers during different stages of the process.  The team has closed significant partnerships as well as expanding operations in important markets such as France, China, the United States, and Luxembourg.

VET’s growth has been slow and steady. Since January 2019, the price has increased by 155%. An ascending trendline has been formed gradually, with price rejecting the zone each time it approaches the lower blue band in the daily timeframe. VETUSD rose from $0.0039 in January 2019 to $0.0089 in May. 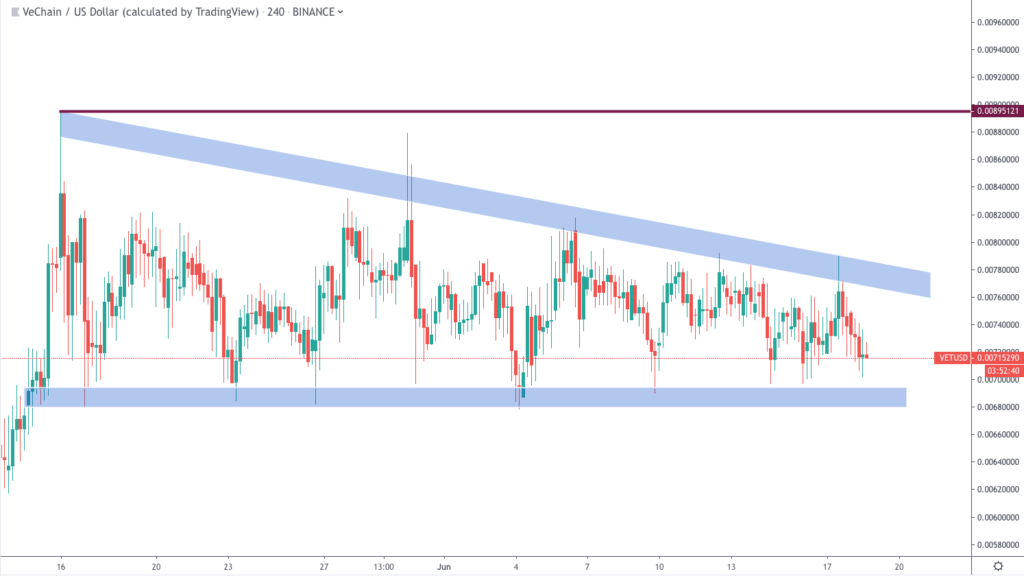 The 4H chart illustrates how price action is currently in an accumulation phase, ranging between $0.0068 and $0.0082. Nonetheless, it is clear that price action has been forming a descending wedge with lower highs each time price goes up to retest the highlighted upper band. There is key support at around $0.0068- $0.0070 that the bears have been unable to break. The bulls are rejecting the $0.0070 zone once more and a possible break of the named formation is now in the spotlight. If VeChain gains some bullish momentum, the price may reach previous highs at $0.0086-$0.0088 (target zone 1). If bearish momentum takes over, a break of $0.0070 could see the price visit the $0.0060 level.