Yesterday, BTCUSD broke out of the $7800-8500 consolidation region, with traders now looking towards the next resistance at $9100. The daily candle closed as a bullish engulfing right above the $8531 resistance. Interestingly, the breakout occurred almost at the same time as the FOMC minutes release.

The FOMC minutes are an important event inside the financial world, as they include all the comments, projections, and fears of the policy members in charge of determining the path of the American economy.  The fairly negative summary of the last FED meeting revealed that some officials were predicting a medium-term recession. Policymakers also agreed on another 25bps cut in interest rates and expressed their concerns over the consequences of the trade war between the US and China.

Even though the American economy remains strong, the smaller pictures are starting to show weakness in investment, factories, and exports. The FOMC minutes and the speech given by Powell this week is addressing the weakness by slightly changing the direction of the US monetary policy towards the use of a tool called “Quantitative easing”. The Chairman of the Federal Reserve emphasised that the US will expand its balance sheet soon, meaning that the measure will be impacting US general reserves.

New monetary strategies such as changing the level of reserve balances and consider the standing repo facilities are huge changes in the overall scene…and hence it was not a surprise to see BTC and GOLD spiking massively yesterday. 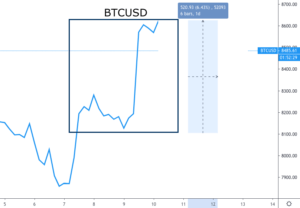 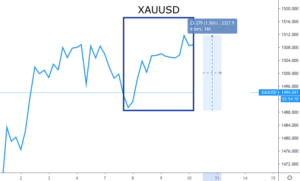 BTC hash rate also rose again, sending the asset back into the green. At the time of writing, BTCUSD is trading at $8526 (5% up in the last 24hours), while other safe-haven assets such as XAUUSD even gained over 1% in less than a night.  This only shows us the power that the crypto market currently has in situations of uncertainty and global risk. Overall, the Cryptonary team is looking for more confluences to enter long in BTC in the next couple of hours (taking into account that in the next FED meeting, Jerome Powell is very likely to cut rates again).