Tether has revealed the breakdown of its reserves for the first time. The stabile coin had previously been criticized for not being open about its reserves. The breakdown came as a surprise to most investors and could be the next step in transparency.

The breakdown shows that 75% of Tether’s reserve holdings include cash equivalents, other short-term deposits and commercial paper. In fact, the majority of these (65%) are commercial paper. The rest include fiduciary deposits (24%), reverse repo notes (3.60%), Treasury Bills (~3%) and actual cash at only 3.87%. 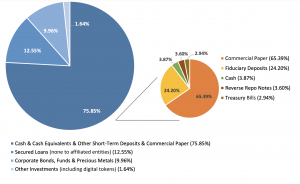 The remainder of the reserve is divided into three categories. Secured loans – none of which are to affiliates – account for 12.55% of total reserves. Corporate bonds, funds and precious metals account for nearly 10%. And, other investments, including digital tokens, account for 1.64%.

It’s not clear what the ratings of the commercial paper or corporate bonds are, which agencies rated them, or which companies issued them. Clearly, the transparency many people expect from Tether isn’t there yet. However, breaking down their reserve is a step in the right direction.

USDT is a very important player in the crypto market. At the same time, it has long had issues with its reserve and whether the company had backed its coins with real dollars. The company’s history of trying to prove their currency was backed is long. In 2018, Friedman LLP worked with the company to conduct an audit. They produced a preliminary report disclosing that USDT Tether was backed by its cash reserves.

Melanion Capital to launch a Bitcoin ETF for European Investors