Electric car-maker Tesla announced in an SEC filing that it is the latest company to convert its balance sheet into bitcoin.

Per the filing, the company whose share price skyrocketed and outperformed the stock market in 2020, splashed $1.5 billion last month.

According to the filing, the carmaker said it purchased the leading digital currency for “more flexibility to further diversify and maximize returns on cash.”

“Thereafter, we invested an aggregate $1.50 billion in bitcoin under this policy and may acquire and hold digital assets from time to time or long-term,” reads the filing.

The company also wrote that bitcoin is risky.

As if that was not enough, the publicly-traded company said it plans to start accepting bitcoin payments for its products.

This would make Tesla the first major auto-maker to accept payment in cryptocurrency.

The importance of Tesla buying and holding bitcoins cannot be understated. After the announcement, Bitcoin’s price surged from around $39,000 to $42,000. 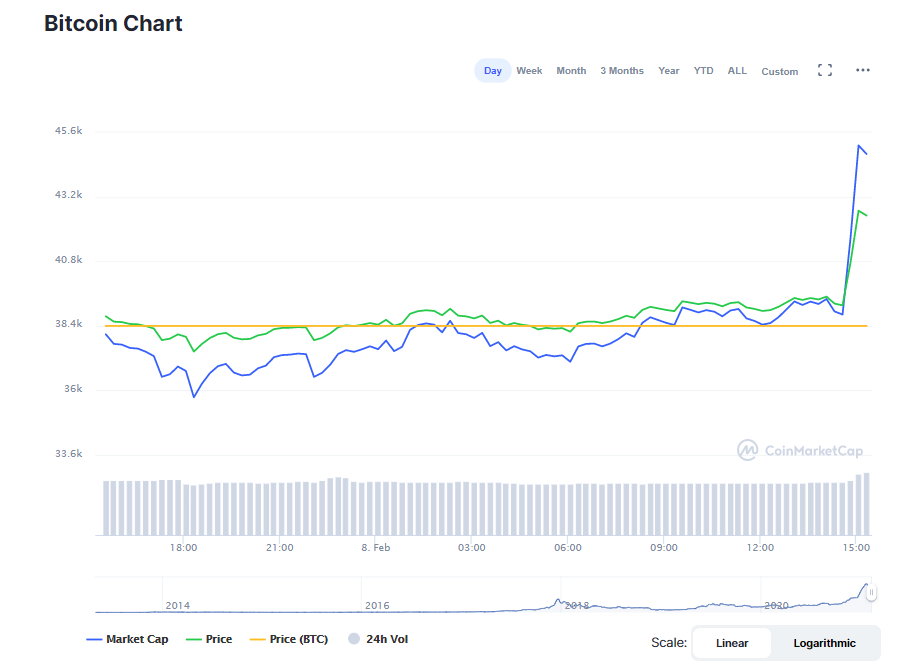 Tesla joins an exclusive club of a few companies that have invested more than a billion dollars in bitcoin.

Microstrategy, which spent over $1.145 billion on bitcoins, has seen its value doubled as the stash is now worth more than $3 billion at current market prices.

The past few weeks have seen Tesla CEO Elon Musk doing a lot of bidding for bitcoin, the leading digital currency, and Dogecoin, a meme-themed cryptocurrency that he said might be his favorite digital asset.

He was responding to Saylor who encouraged him to do his “shareholders a $100 billion favor” of using the company’s treasury to buy bitcoin.

After that, it was Elon Musk doing what only Elon Musk can do.

He tweeted that “bitcoin is my safe word.” He followed that by changing his Twitter bio to “bitcoin.”

Musk’s tweets about bitcoin have positively affected the price of bitcoin. After the bitcoin posts, he turned his attention to Dogecoin.

The coin has had an incredible run, posting new record highs as a result of Musk’s Twitter actions.