MicroStrategy spent more than $1 Billion in bitcoin purchases in 2020

MicroStrategy, a leading business intelligence company, announced on December 21 that it purchased an additional 29,646 bitcoins valued at approximately $650 million. The publicly-traded company bought the latest tranche of bitcoin at an average price of $21,925 per BTC, inclusive of fees and expenses.

MicroStrategy is now a whale after acquiring an aggregate stash of 70,470 bitcoins, which set the company back by $1.125 billion. Overall, the company has bought each bitcoin at an average price of $15,964, inclusive of fees and expenses.

“The acquisition of additional bitcoins announced today reaffirms our belief that bitcoin, as the world’s most widely-adopted cryptocurrency, is a dependable store of value.”

Bitcoin’s meteoric rise in 2020 comes at the back of a major nosedive in March when the digital asset fell below $5,000 due to coronavirus lockdown fears.

Catalyzed by the halving event and an increased appetite by institutional investors, bitcoin is on a tear, smashing its own record set in 2017 and setting new peaks.

After reaching a new all-time high of over $24,000, bitcoin has pulled back and at press time, is exchanging hands for $23,288 per coin. The asset is up more than 200% against the USD in year-to-date (YTD) performance. 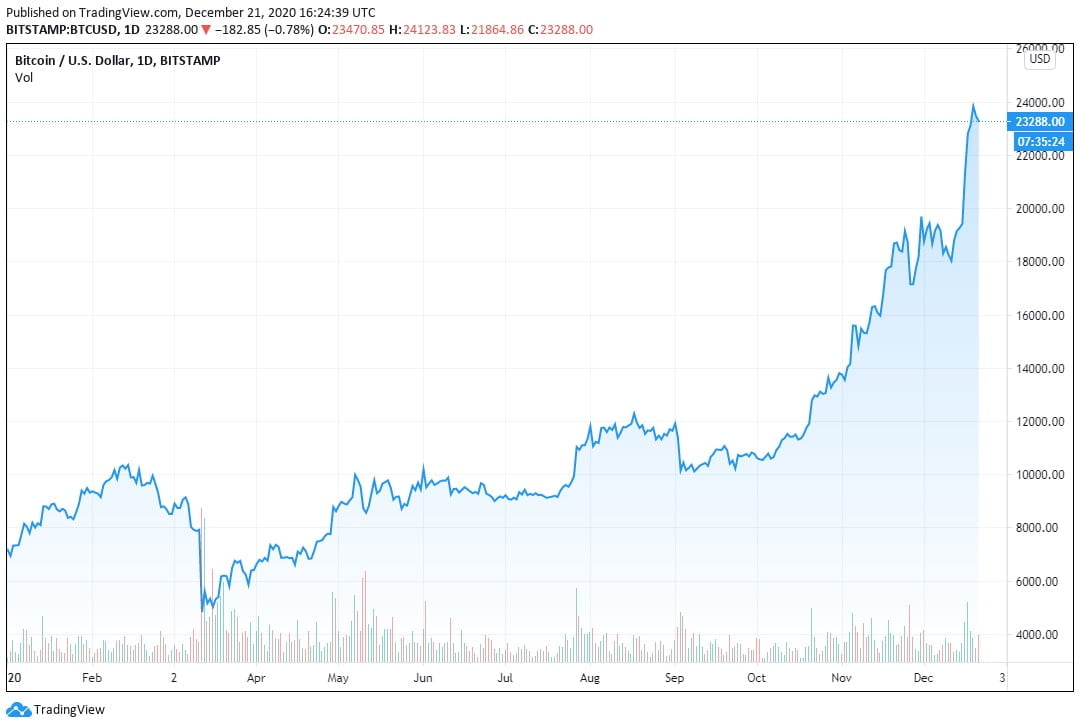 Tesla CEO Elon Musk trolled bitcoin on Twitter yesterday. Saylor offered to share his playbook with Musk offline, in an effort to convince the tech entrepreneur and billionaire to move a portion of Tesla’s balance sheet into bitcoin.

Traditional companies initially frowned upon cryptocurrencies because the market lacked regulation, was headlined by major security breaches of exchanges, and the perception that the assets have no intrinsic value.

The market was driven by retail investors and individuals who felt that the current financial system was biased against them.

However, as the industry matured, it attracted traditional companies who brought some form of legitimacy.

The financial services firm PayPal recently introduced an option for its U.S. customers to buy bitcoin on its platform.

Digital payments company Square bought $50 million in bitcoin as part of its investment drive in cryptocurrencies. All this points to new market dynamics involving institutions betting big on bitcoin. Perhaps the only question is “who is next.”