Sentiment is in the Neutral zone in the exact middle as market participants are uncertain about the next direction for the crypto market. When in Neutral zones, market sentiment does not affect prices in strong ways nor does it gives out warning signals like it does near extremes. 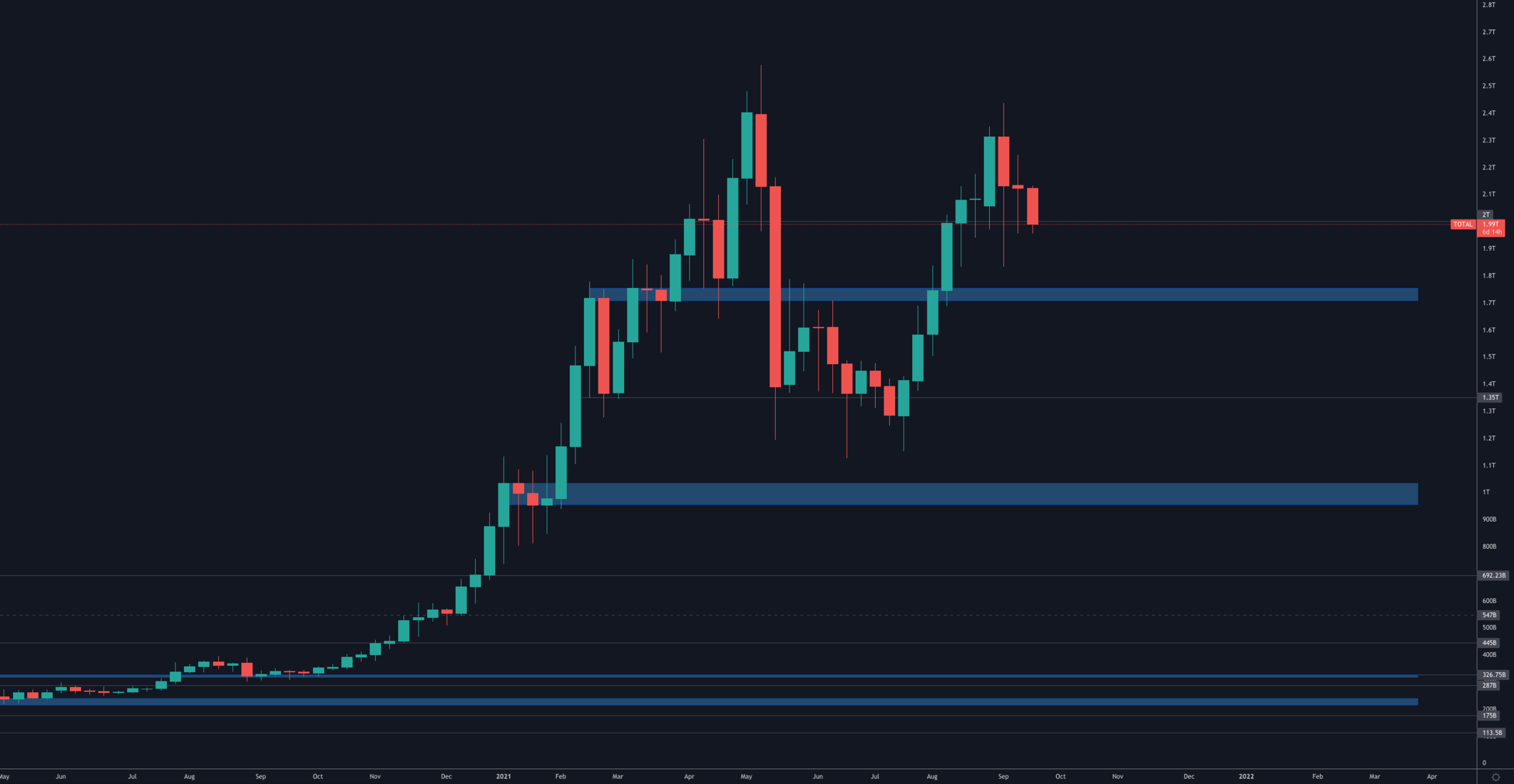 The Total MCap has a support level which is both psychological and a key level at $2T. As of now, this level has been holding on the daily and weekly timeframes. What we are seeing is retests of that level.

Of course, if that level breaks then further downside towards $1.7T would be on the cards. 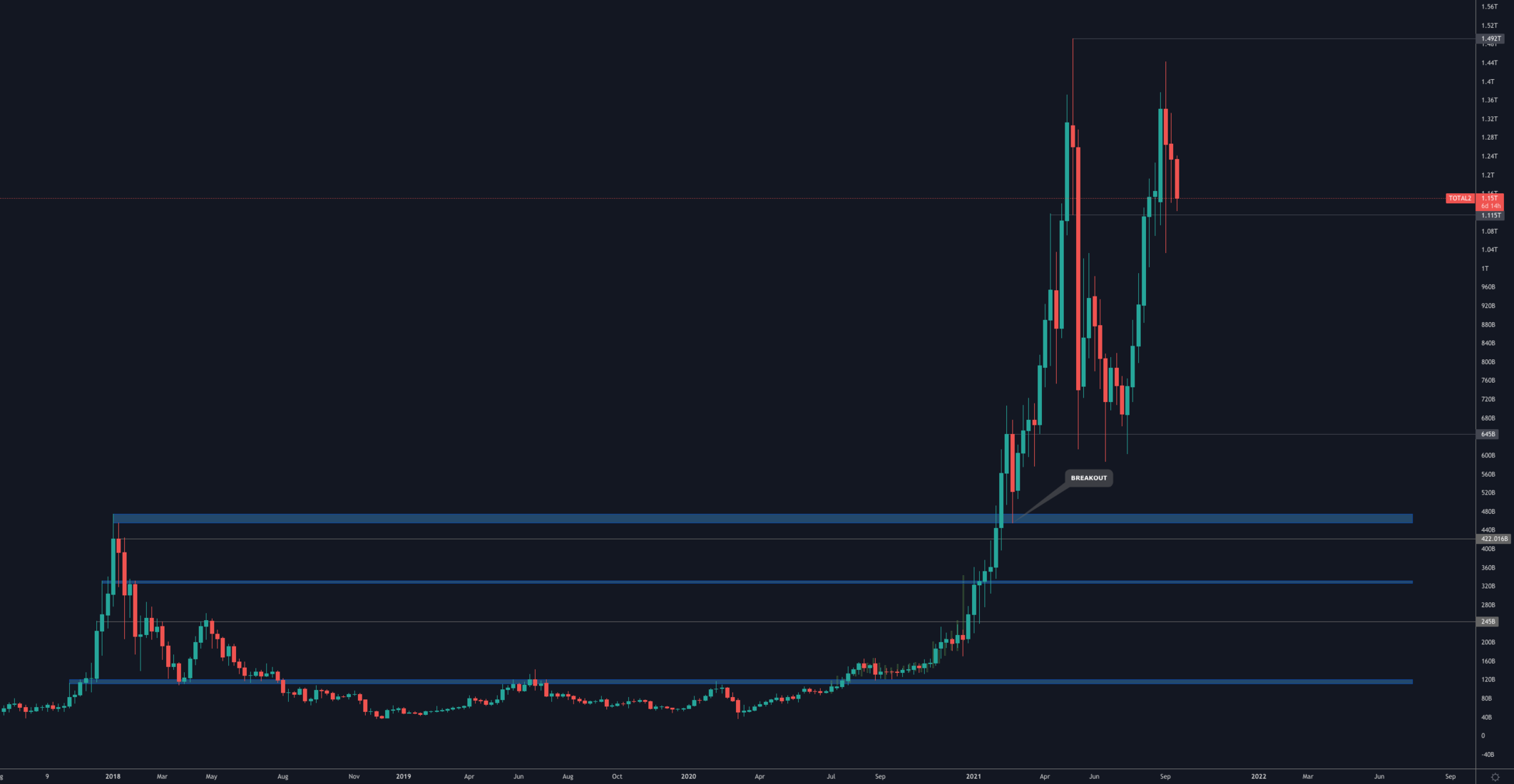 Similarly, the Alts MCap has support right underneath at $1.115T. Given that price is near support, the next key level in consideration is the previous high ~$1.5T. Of course, there are invalidations for any scenario and in this case it would be a break of support which would lead towards $645B.

The reason for the zoomed out chart is to put things into perspective for anyone investing for the long-term. All the price action taking place is somewhat of a consolidation post breakout from the 2017 highs – a breakout we’d never fade ourselves. 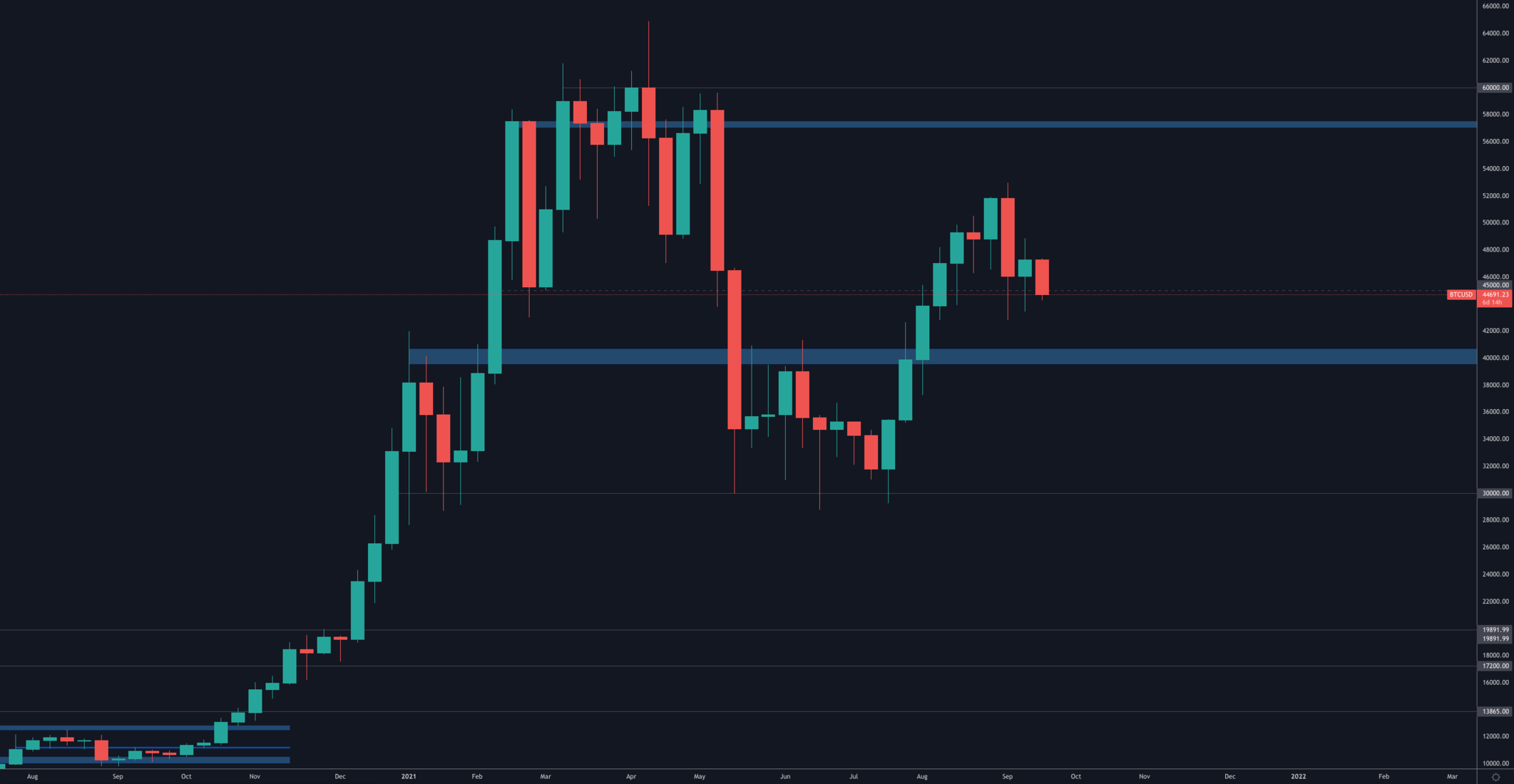 Bitcoin’s price had closed a bearish engulfing candle on September 12th but it also had support right underneath at $45,000. What this communicated, which we stated, was the increased likelihood of a few weeks of consolidation between $45,000 and $50,000 before further upside. If the bearish engulfing candle occurred with no support underneath, it would’ve been a different story of course. 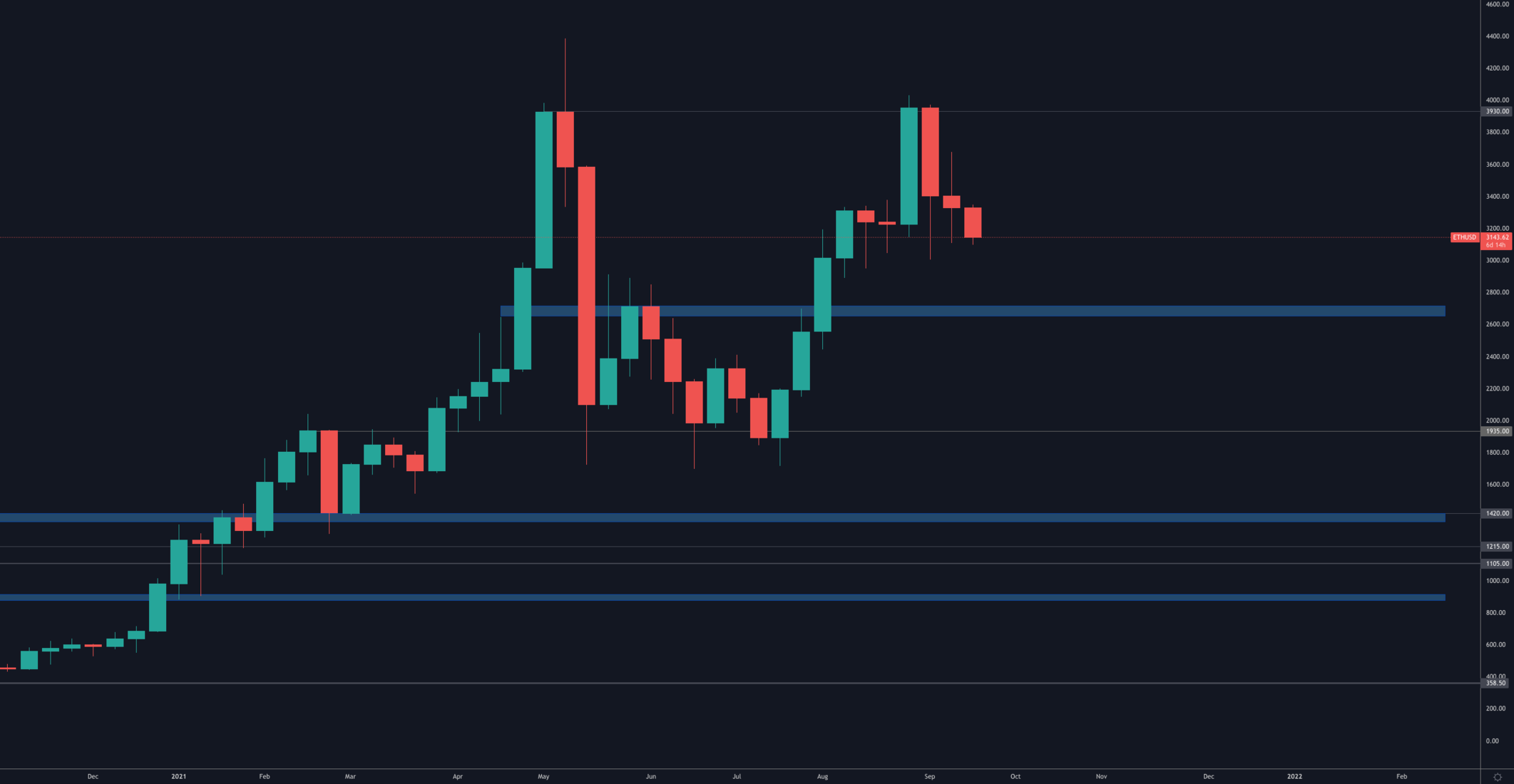 ETH in a semi-dangerous spot with too many tests of $3,200 (support). A break of support on the daily timeframe would lead to $2,500. That break would also likely coincide with a BTC break of $45,000 which would send it towards $40,000. Monitoring daily candle closures will be important for opportunity spotting. 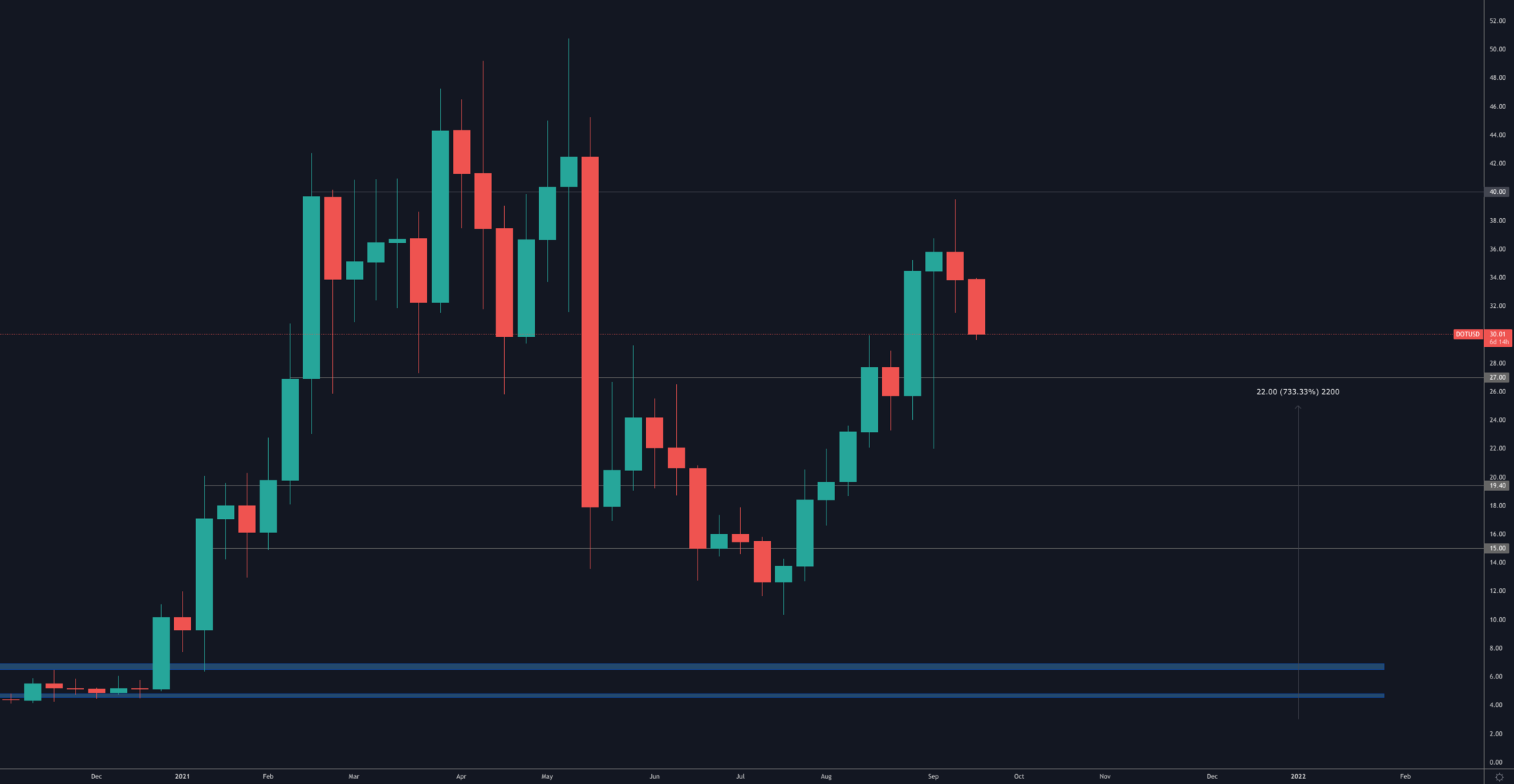 DOT found resistance at ~$40 and has support at $27 which helps its bullish case during this latest dip. DOT above $40 is where things become interesting. 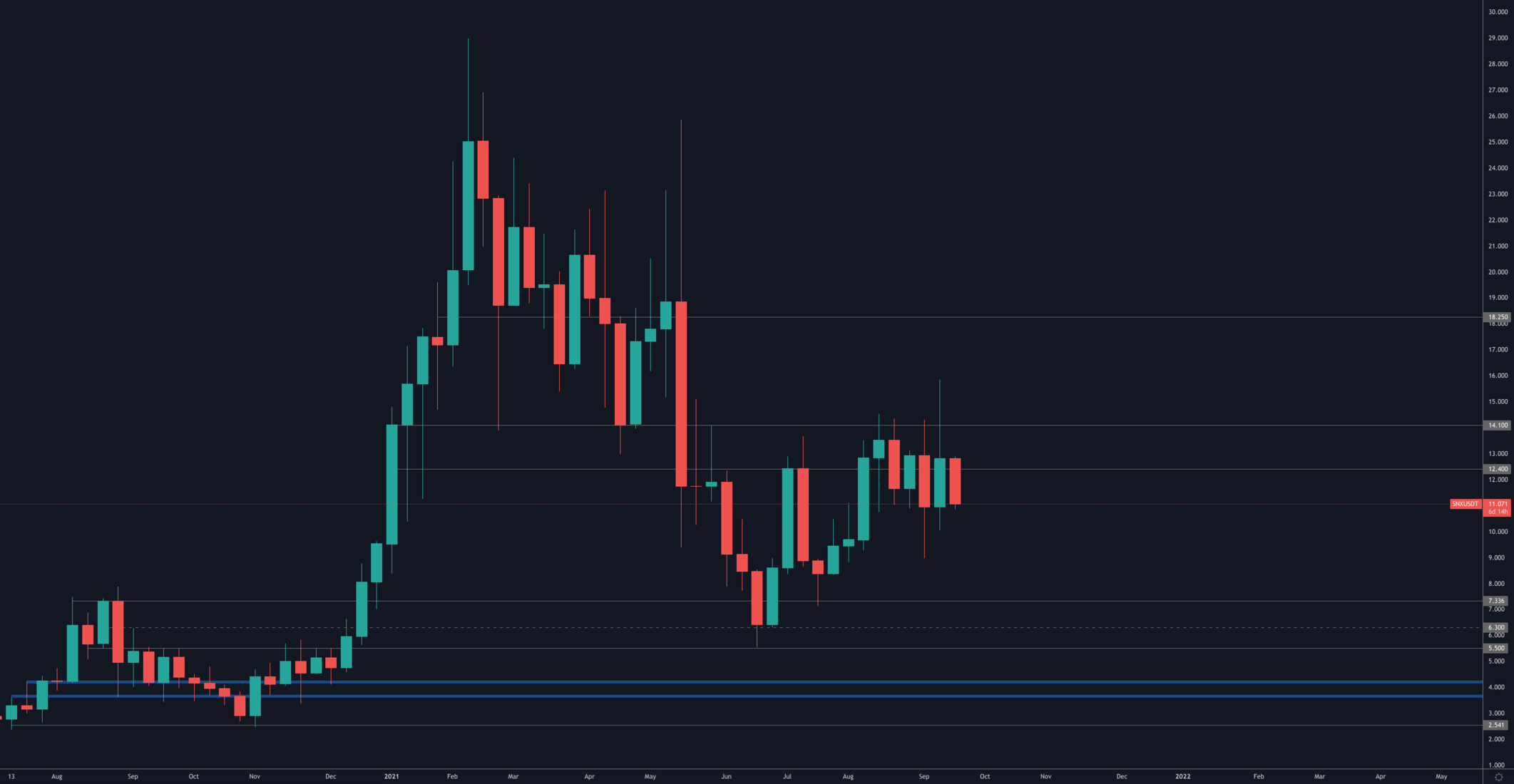 SNX did not manage to close a weekly candle above $14.10. This unfortunately maintains the bearish market structure – we had stated it only changes once $14.10 is reclaimed. Nonetheless, continuous tests of that level deplete the sell orders which can eventually open up the obstacle for a breakthrough. 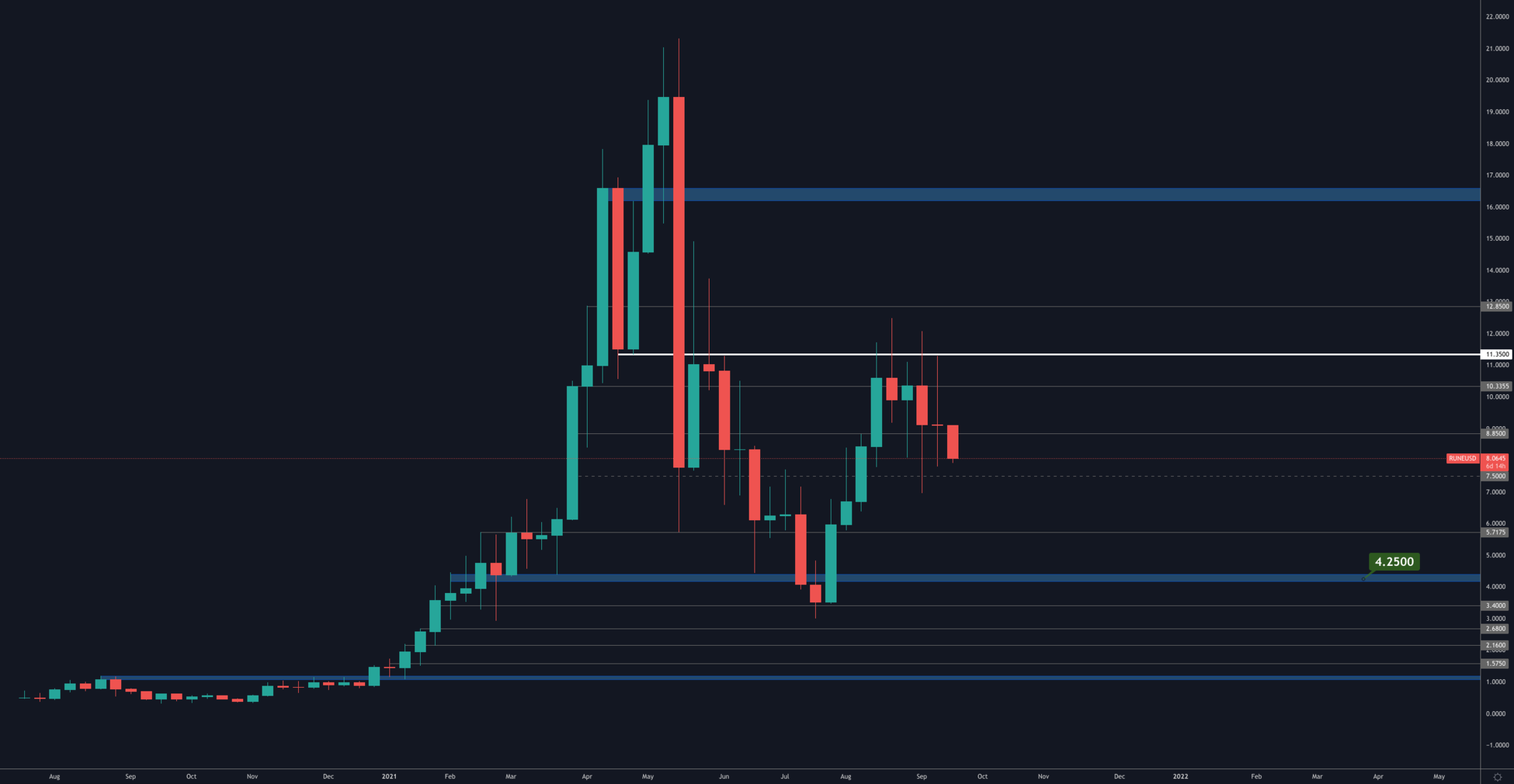 When RUNE was trading near $11.50, we had stated that this was a golden opportunity for anyone looking to de-risk (or didn’t want to undergo downside) as a ‘safer’ re-entry could have been made once $11.50 is reclaimed. Reason-being that $11.50 is the line in the sand that separates bullish from bearish territory for RUNE.

Until a reclaim occurs, RUNE will keep consolidation and seeing a bit of pain for holders – like us. SOL’s weekly chart is too vertical for an analysis, which is why we’re doing the daily timeframe.

SOL is looking to test the liquidity area at [$124-$130], we’ll see whether it’ll be a recovery or dead-cat bounce – based on volumes. 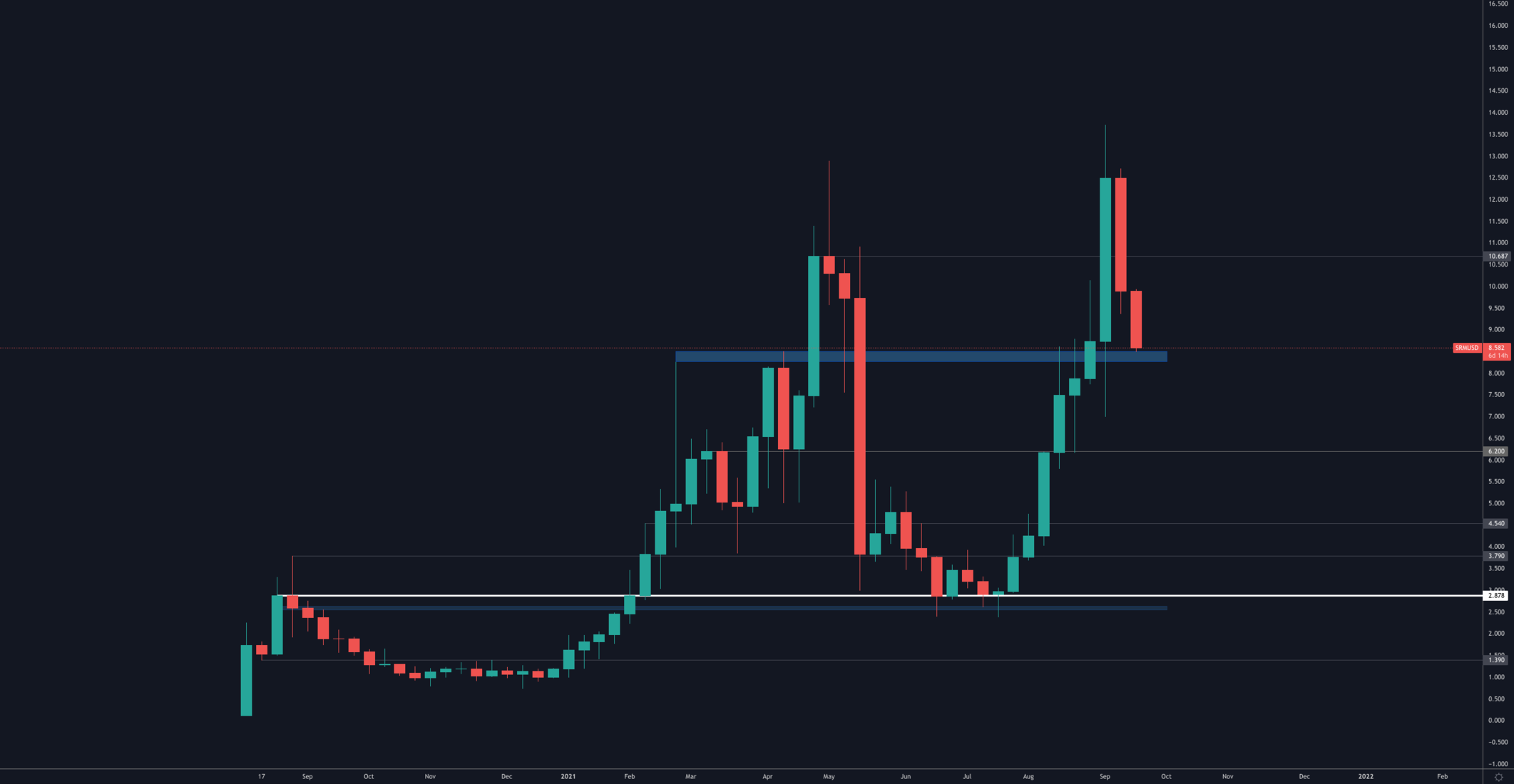 Not looking too great after the failure to hold $10.50. Nonetheless, SRM went back to support at $8.50 – though if that breaks it’d bring on decent downside. 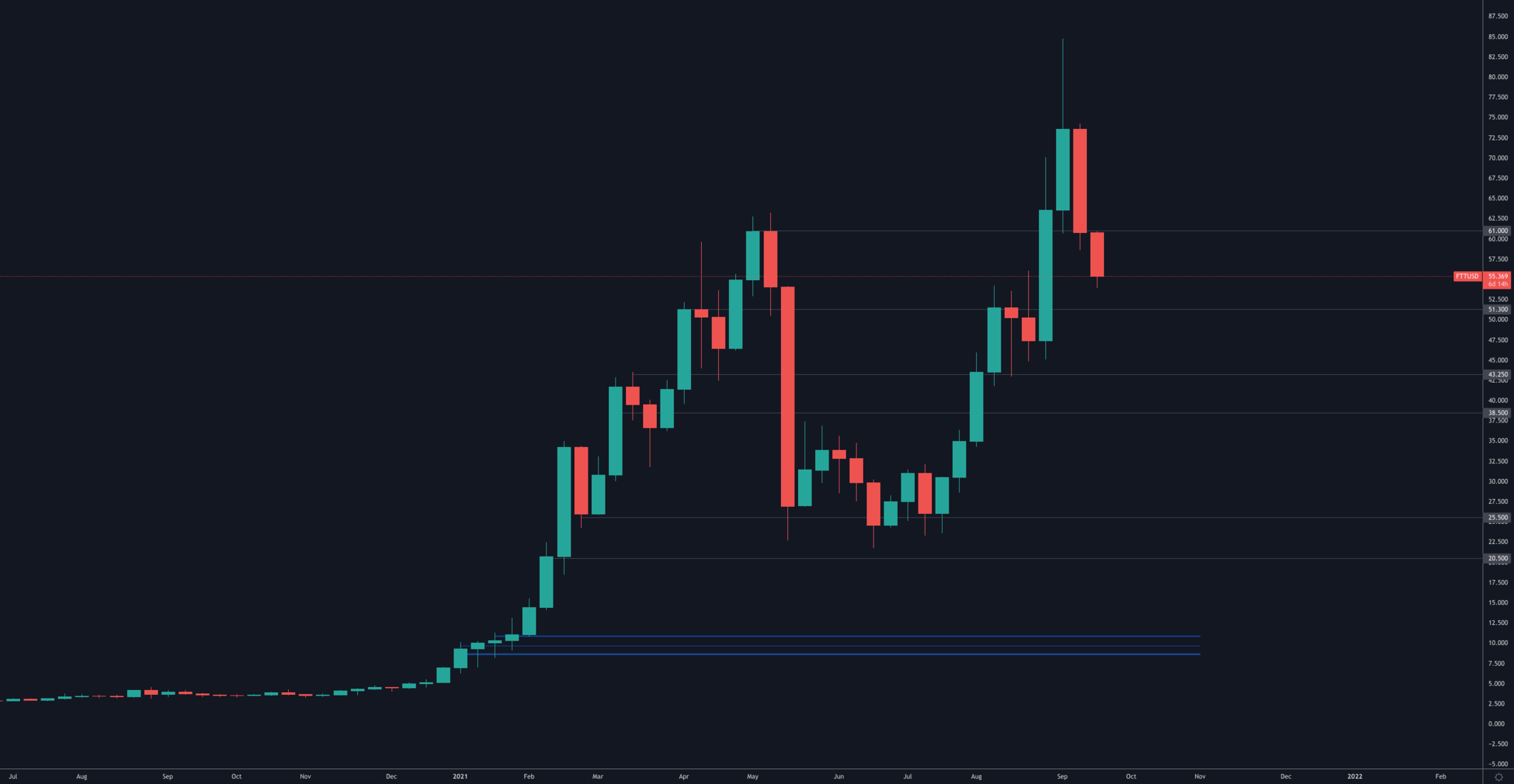 A bearish engulfing candle is not what one would like to see after a breakout from the previous highs. $50 looking very likely on FTT. 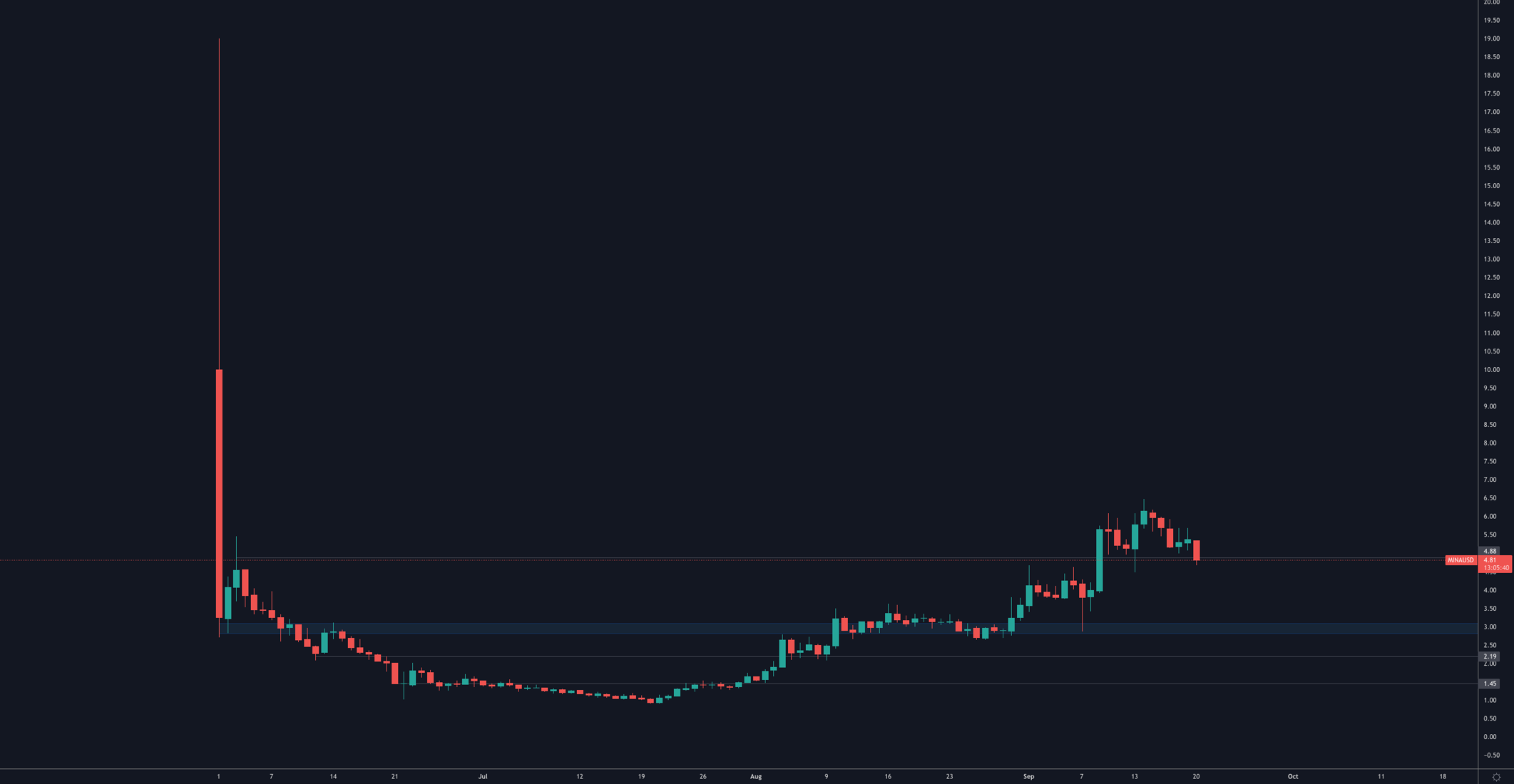 Thus far, MINA is holding support at $4.88. We must monitor for a break as that would bring $3 once again. 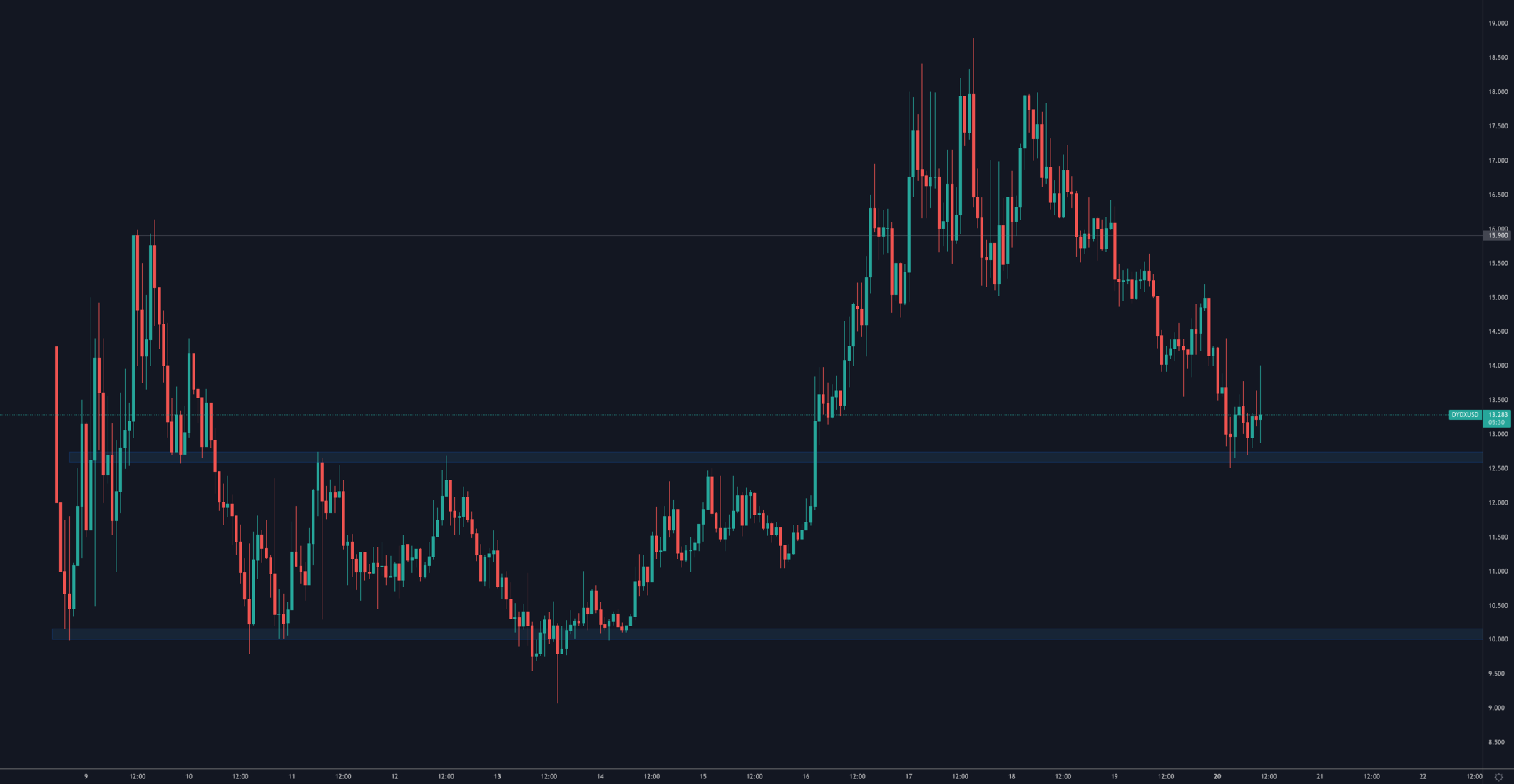 DYDX found support at $12.75 as stated yesterday. If Bitcoin continues for further downside, it’d be tough for DYDX to hold still and $10 would be likely.

Disclaimer: Not financial nor investment advice. Any capital-related decisions you make are your entire responsibility.