While sentiment is in the “Greed” region, these recent resets can give further longevity to upside moves. This is a very short yet concise summary of the situation. 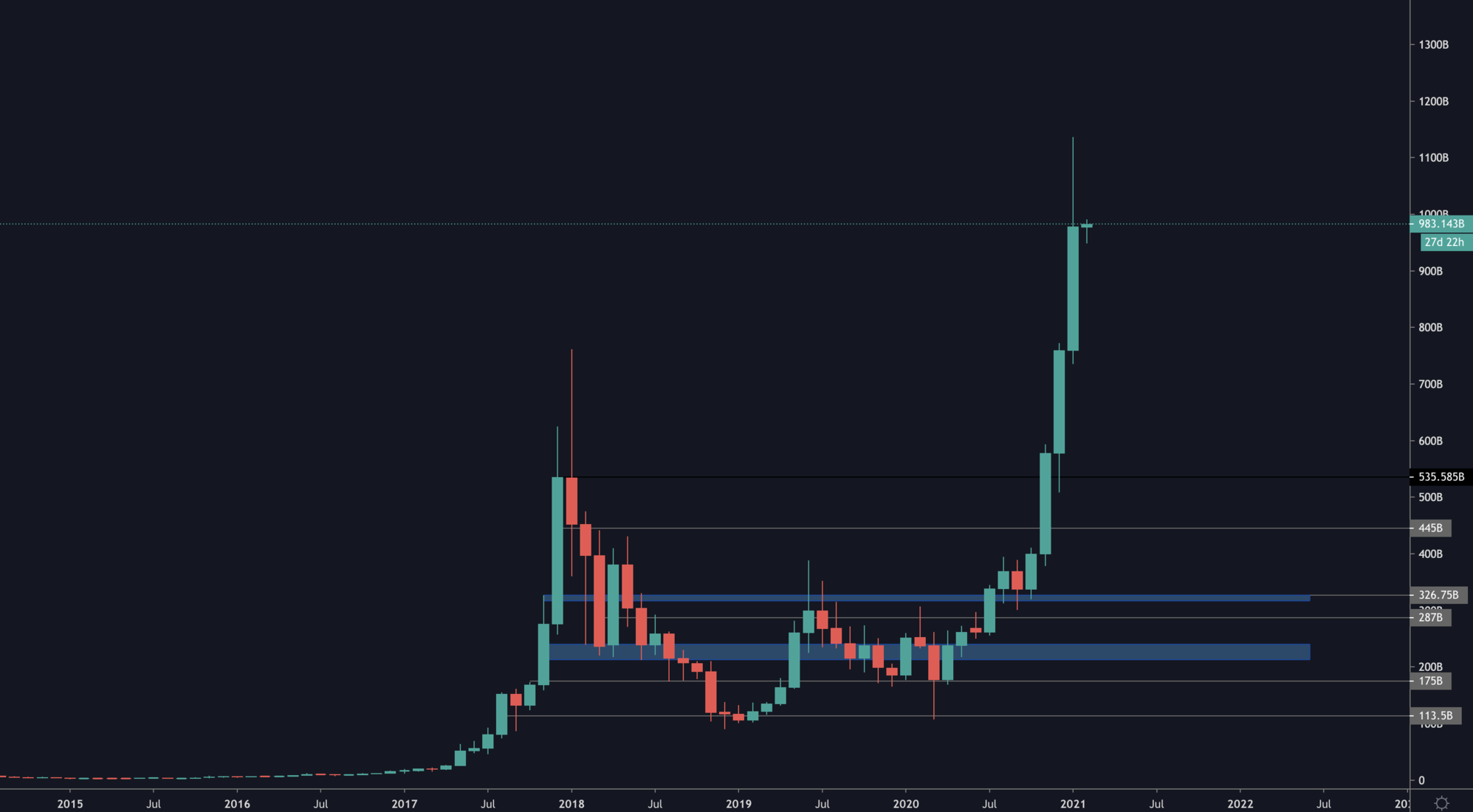 The Total Market Cap is struggling with the $1 Trillion psychological barrier. This chart is mainly posted to analyse the candlestick formation of the latest monthly candlestick. When you compare this to Bitcoin’s from image below, you’ll find this one more than half of the monthly candle being a full body; note a large wick which would signal selling. 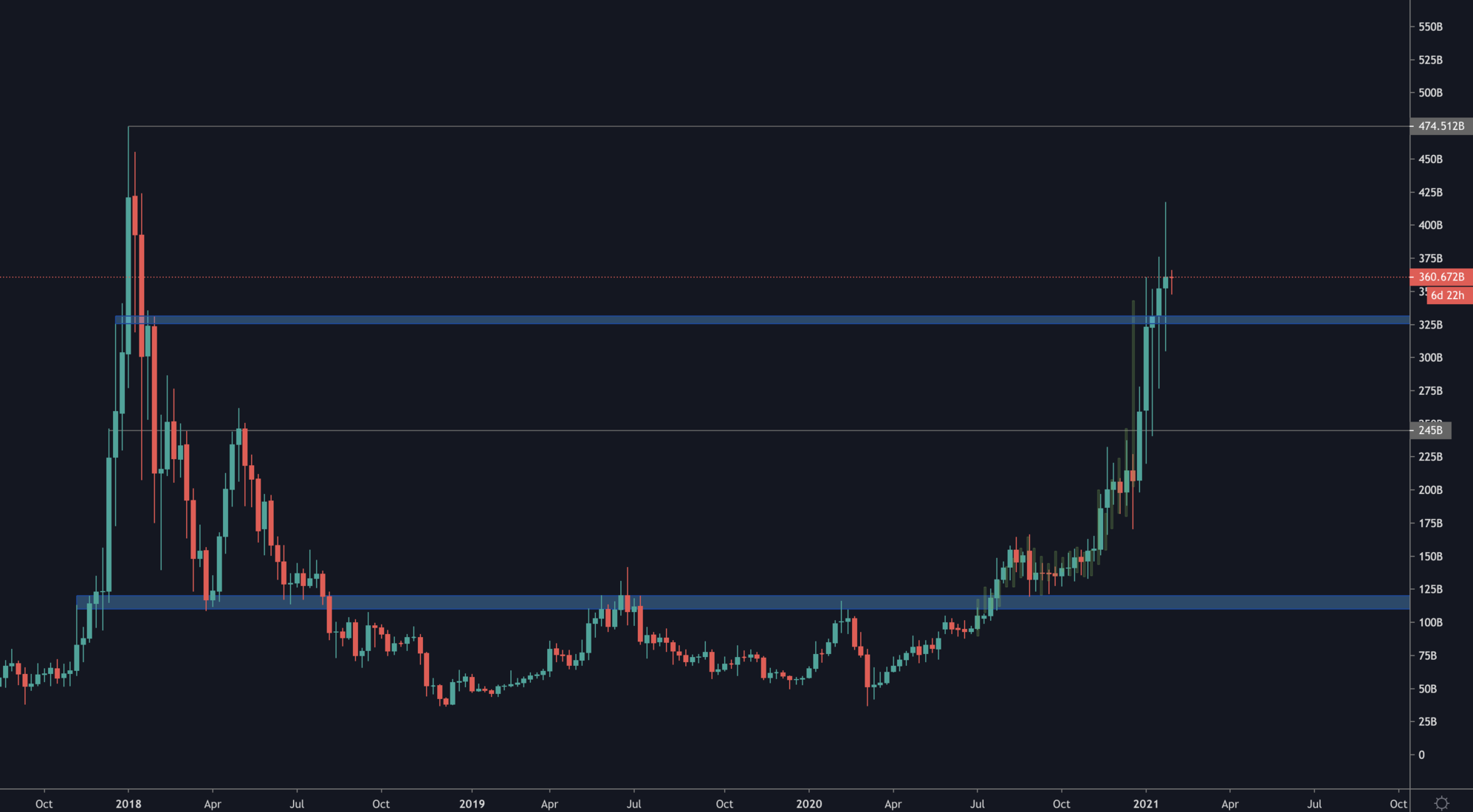 The weekly candle has closed again over the resistance flipped to support: $325B. This sets the next target at the previous All-Time High. 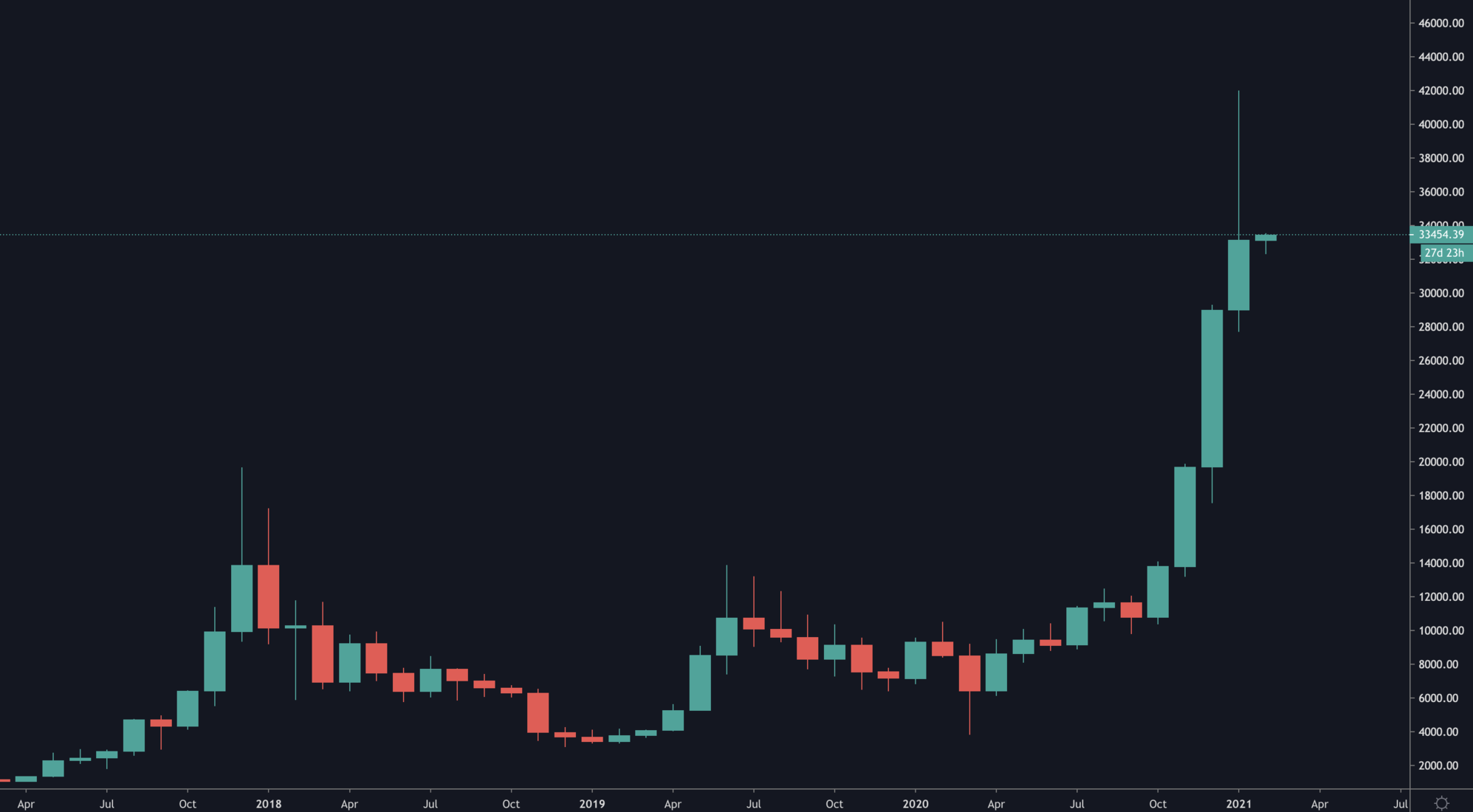 On the monthly chart, the latest monthly candle is not bullish. However, inside of the month Bitcoin will likely revisit high $30,000s. Otherwise, it seems like a local top has been built here. 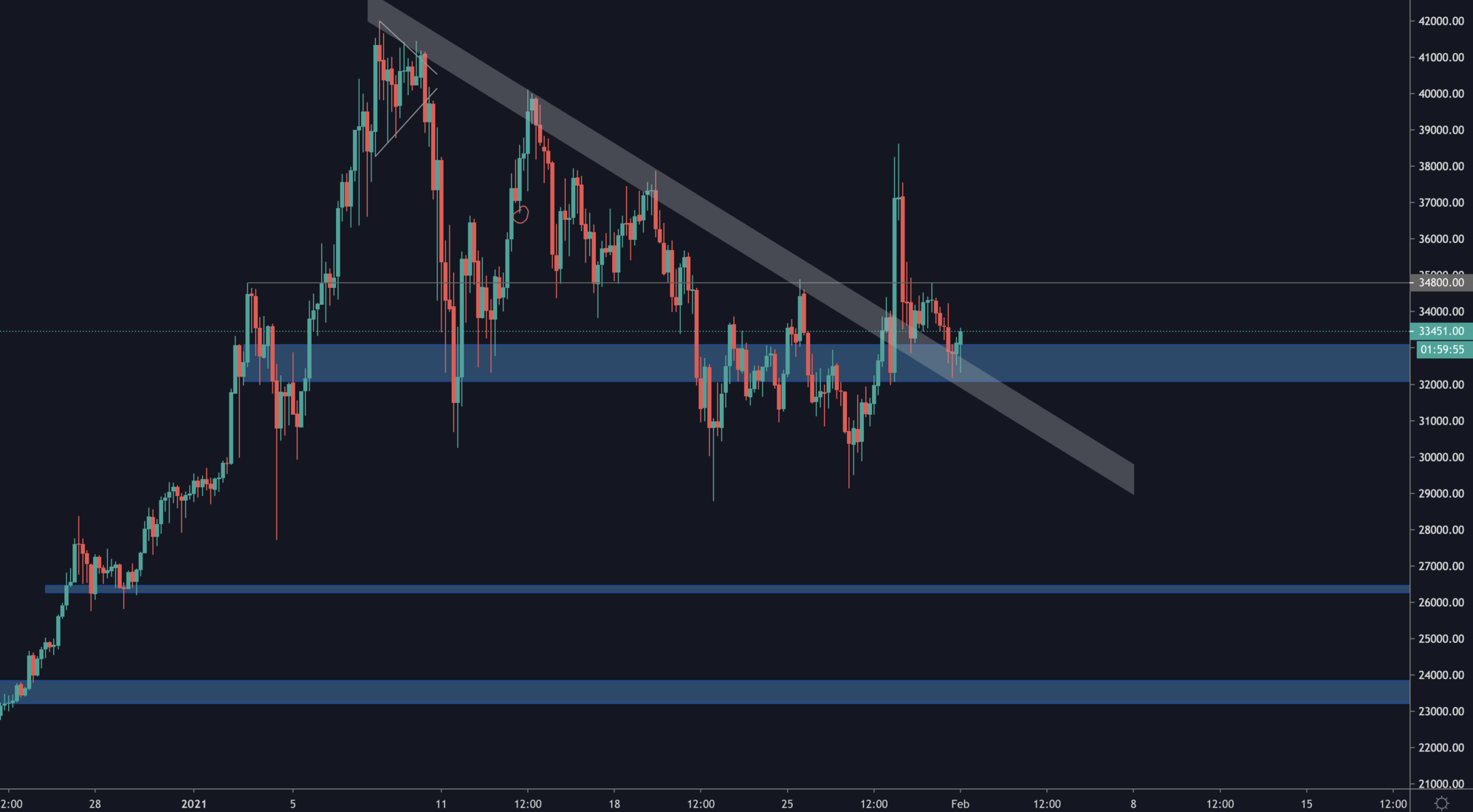 From a shorter timeframe perspective, Bitcoin returned back to the $33,000 which coincides with a retest of the broken trendline. After the sizable movement on Elon’s candle, followed by a return back, it creates confusion amongst market participants which favours a rally on Altcoins. 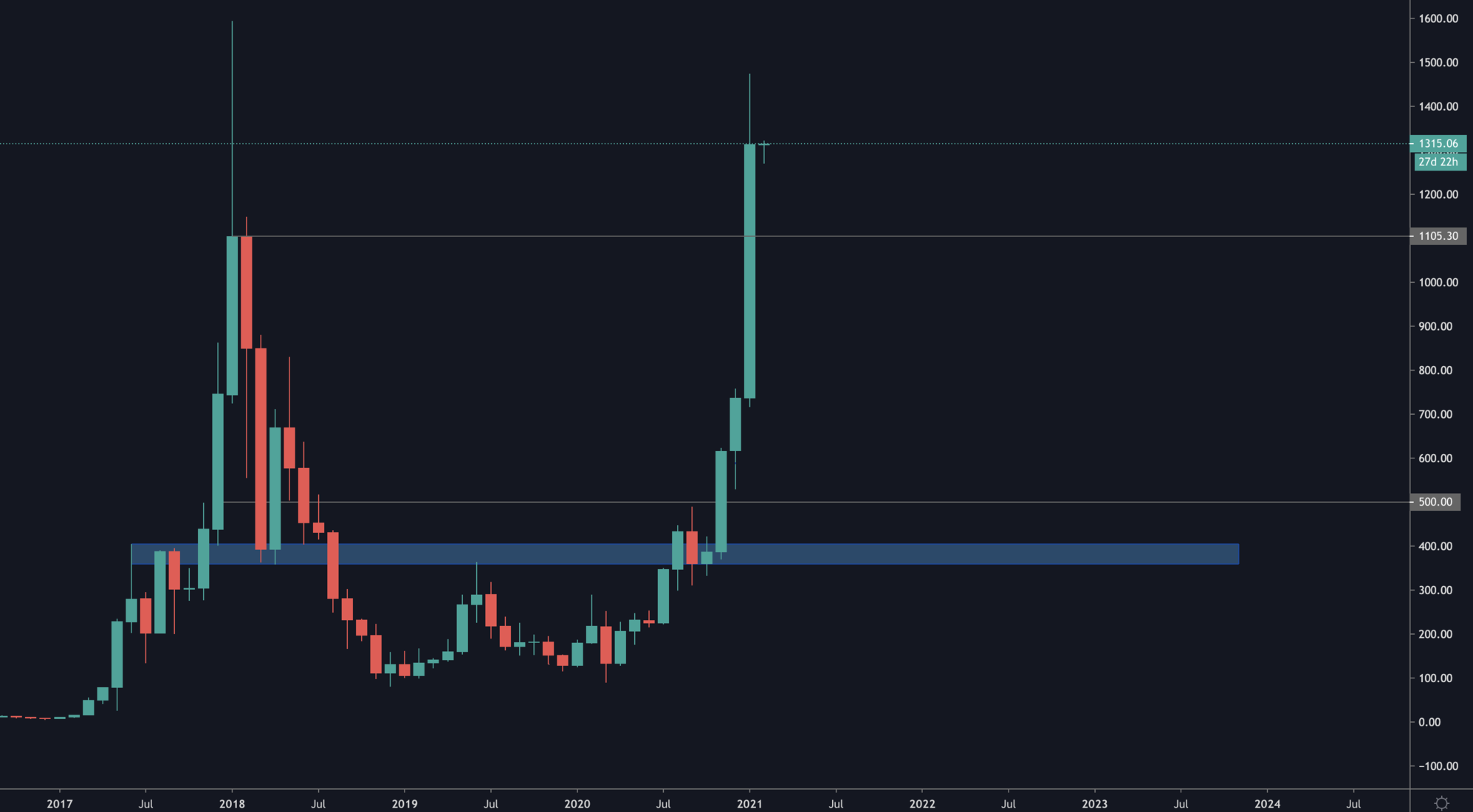 ETH’s monthly candle has closed well above the 2017 monthly high which calls for further continuation in February. 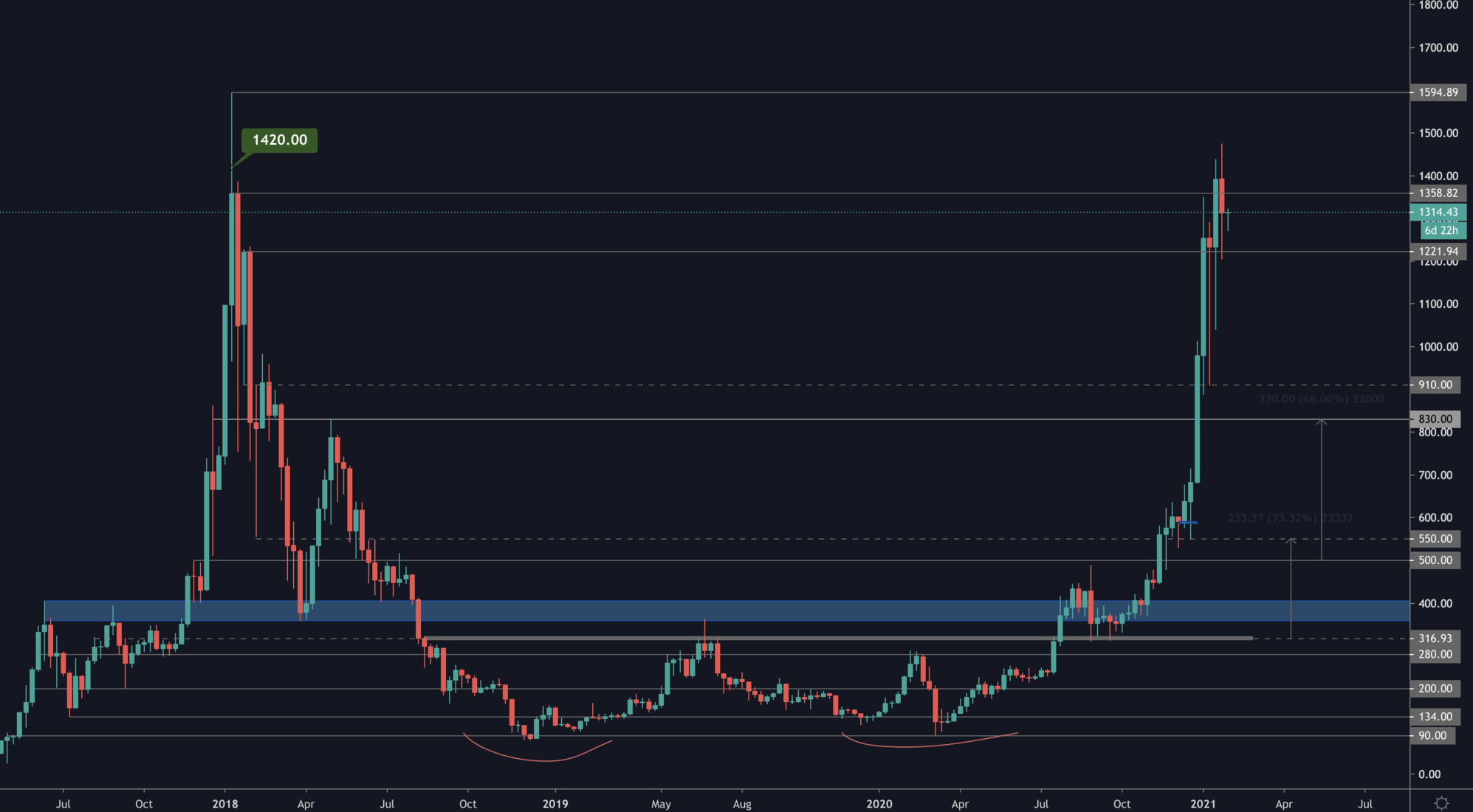 Price action would have been more bullish had the weekly candle closed over $1,360. Despite that, ETH continues to registers higher high and higher lows. 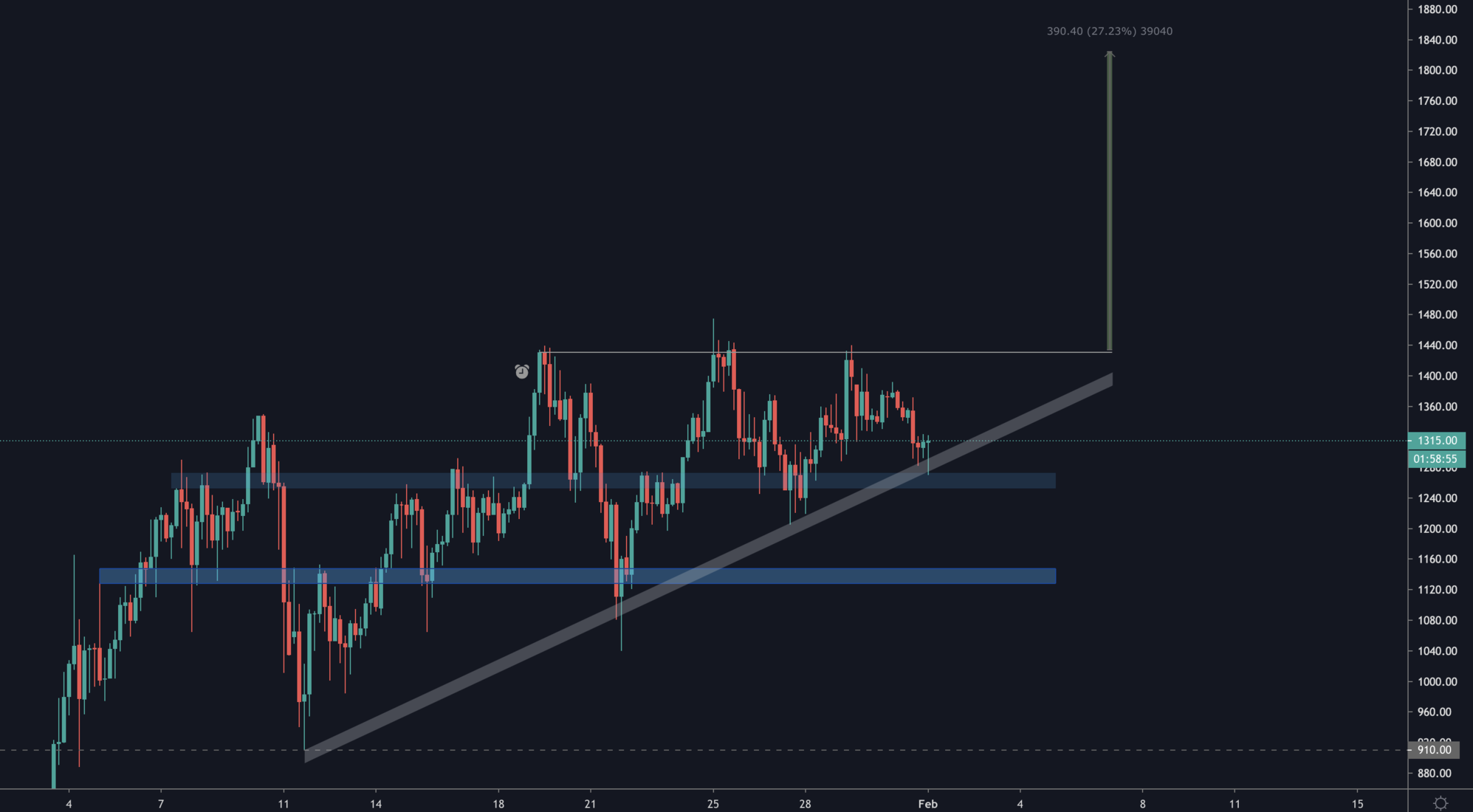 On a smaller timeframe, these higher lows are very visible as they communicate accelerating buying power. If this ascending triangle works out (3 out of 4 chances that it does), then ETH will be destined for $1,850+. 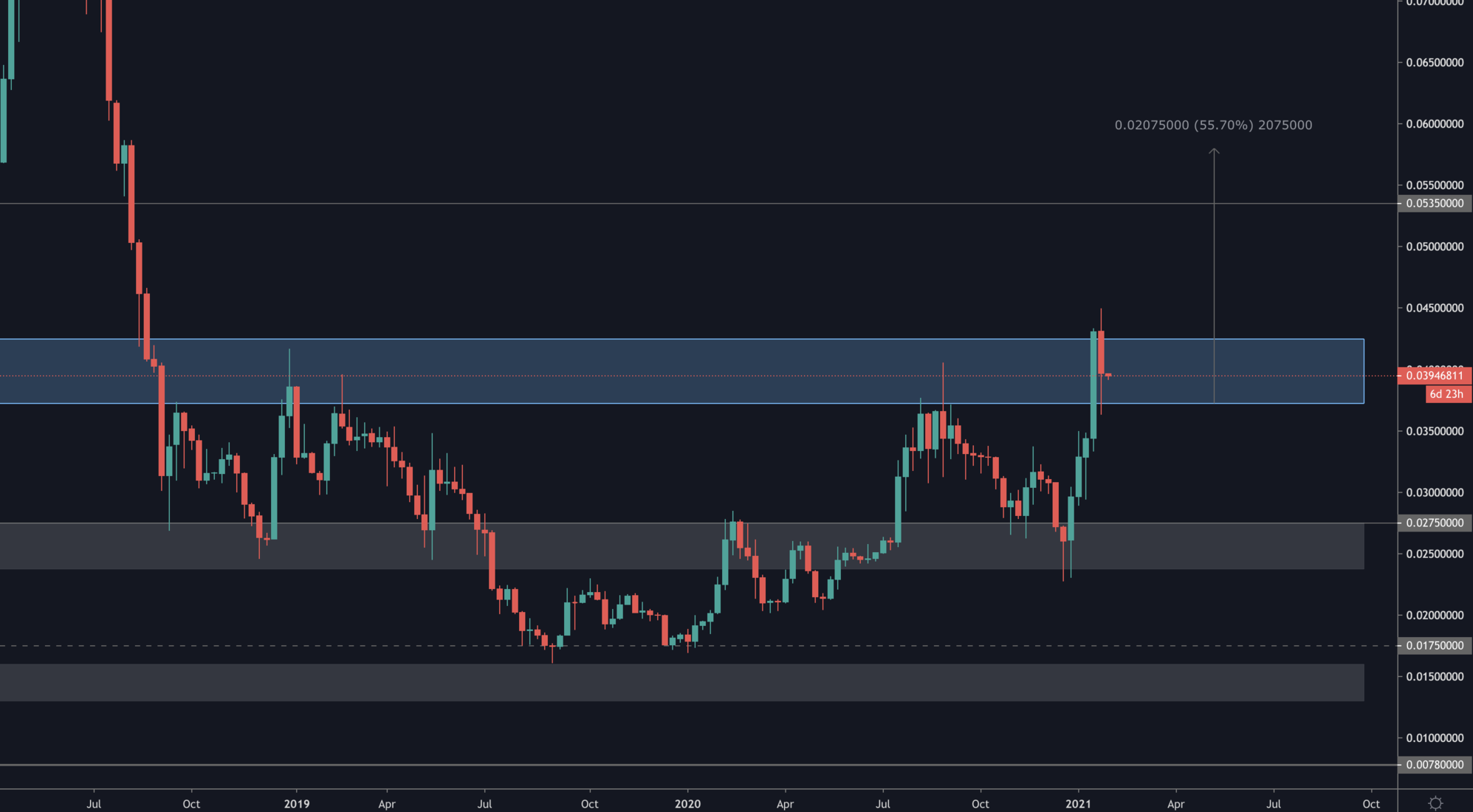 After 885 days of price being stuck under this resistance. This breakout on the ETH/BTC pairing indicates that ETH will likely outperform BTC over the coming weeks. 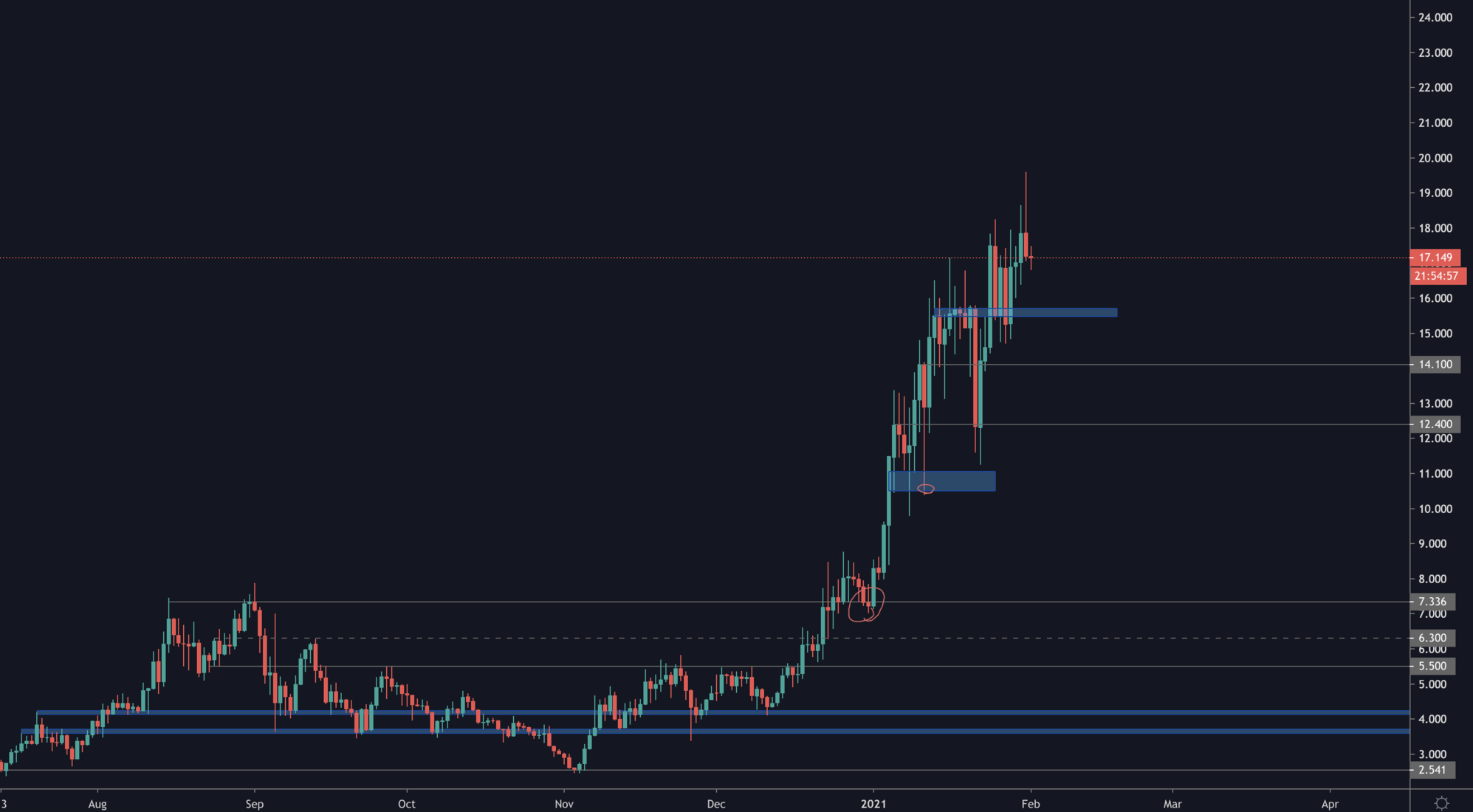 Similar to the consolidation post-expansion we witnessed on ETH, SNX is looking to further go into discovery (as long as BTC and ETH allow it). 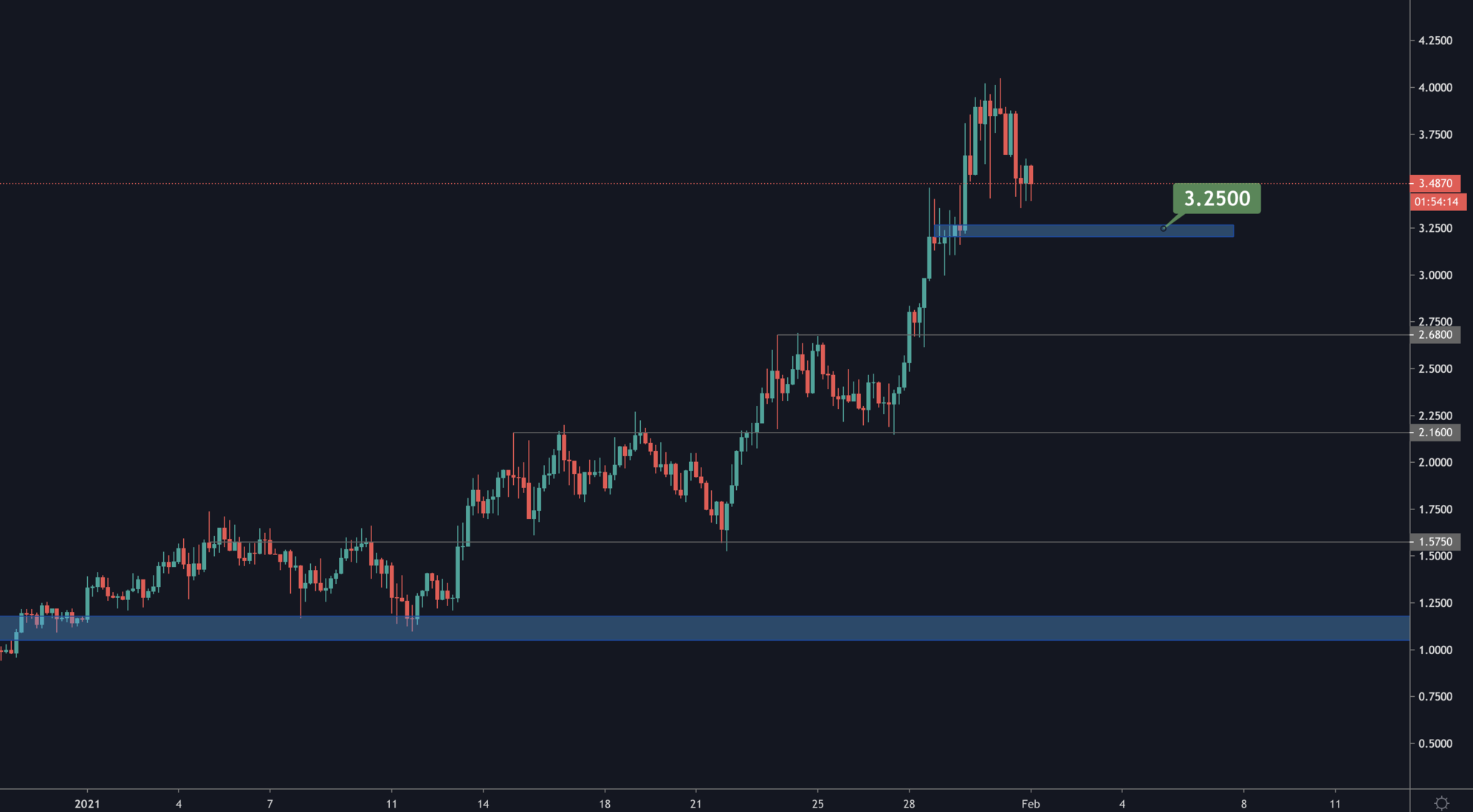 RUNE pulled a spectacular rally over the past 24-48 hours. It is now approaching support (annotated on the chart) from which it may bounce and follow further upside discovery. 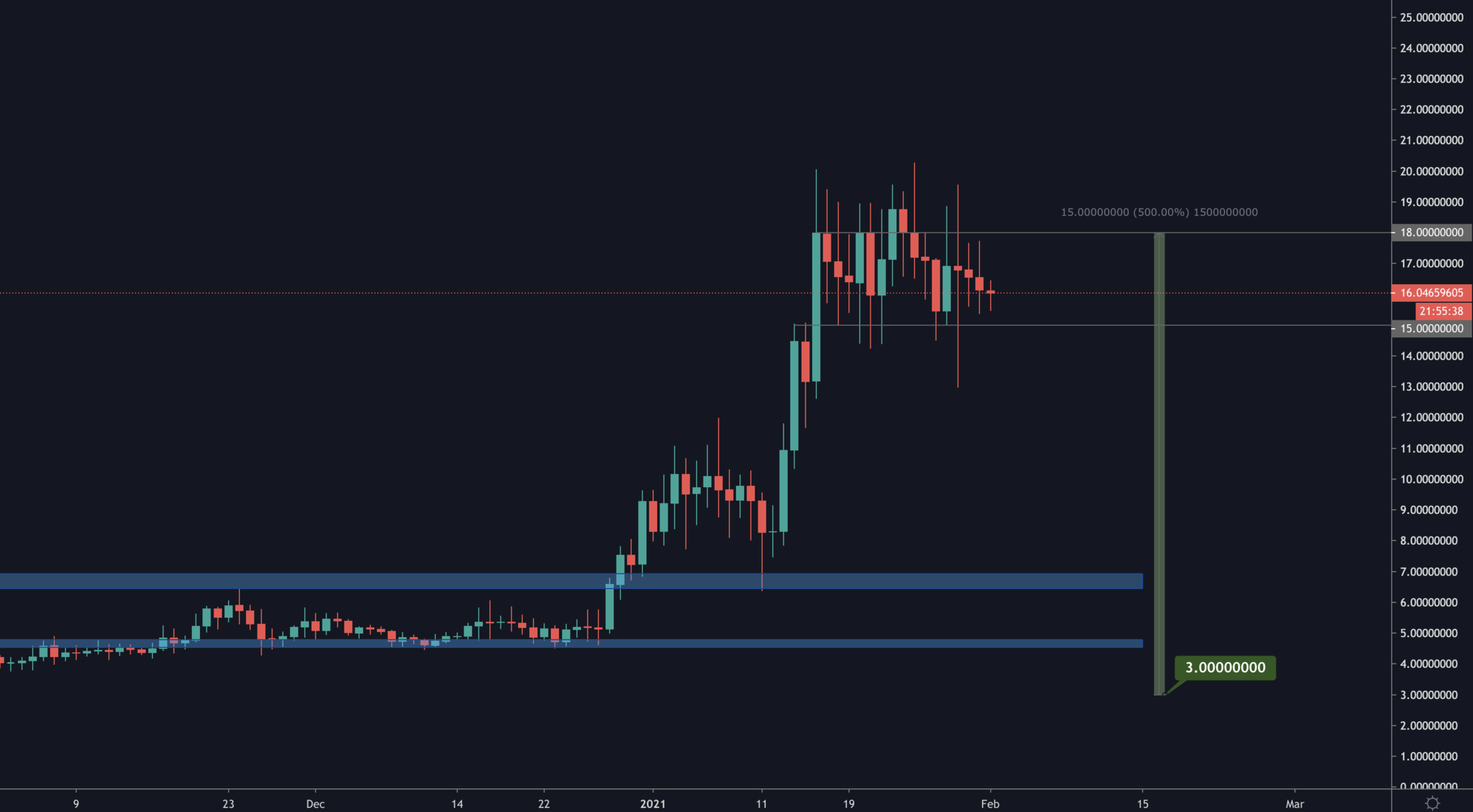 DOT has advanced massively. However, on a daily timeframe it is stuck in the ($15-$18) region. A breakout either way will inform us further about the next move. 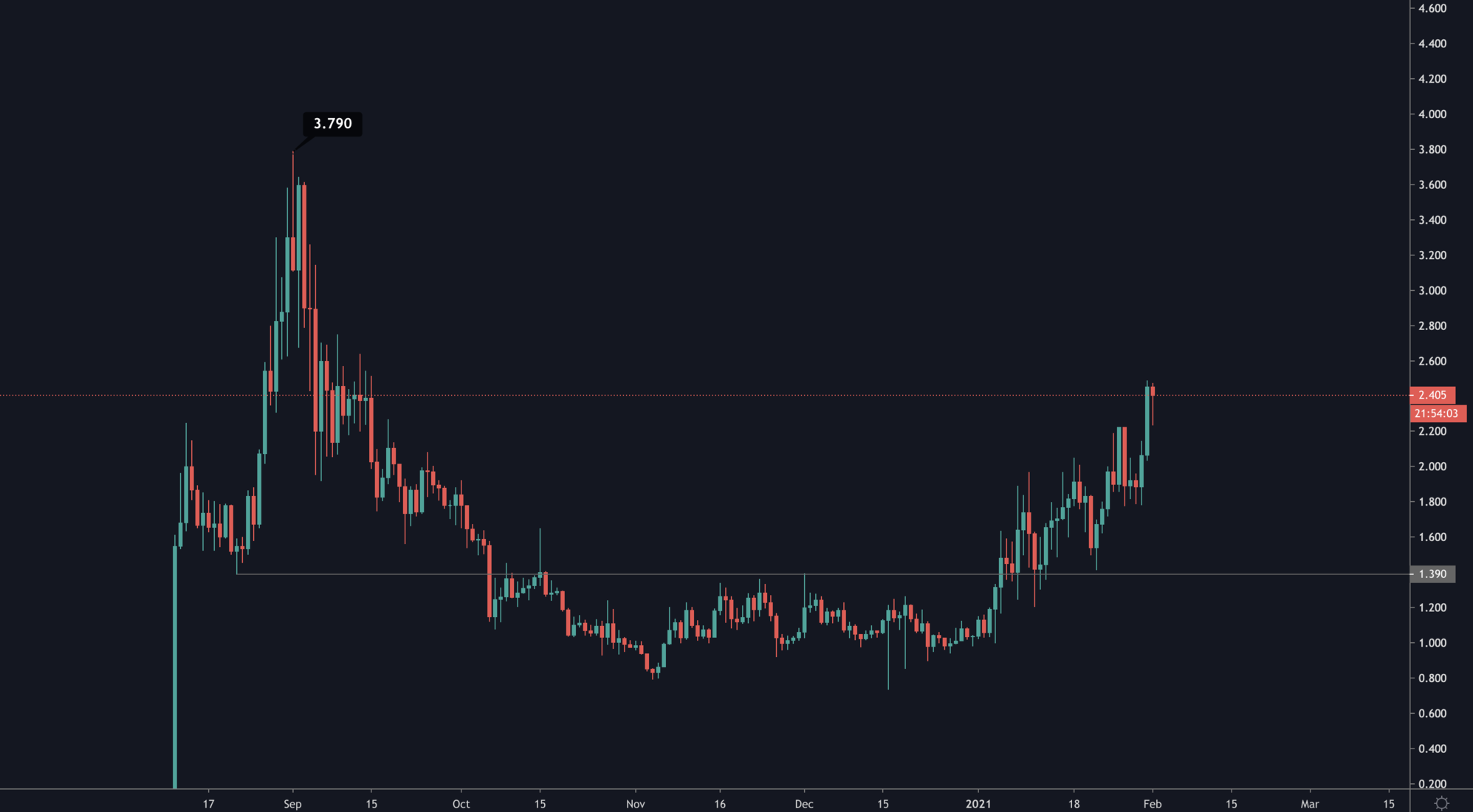 SRM is the simplest chart and one we have a lot of confidence in. The breakout from accumulation and slow grind higher communicated that buying acceleration was incoming and it has begun. The target is $3.79 and not a penny less. 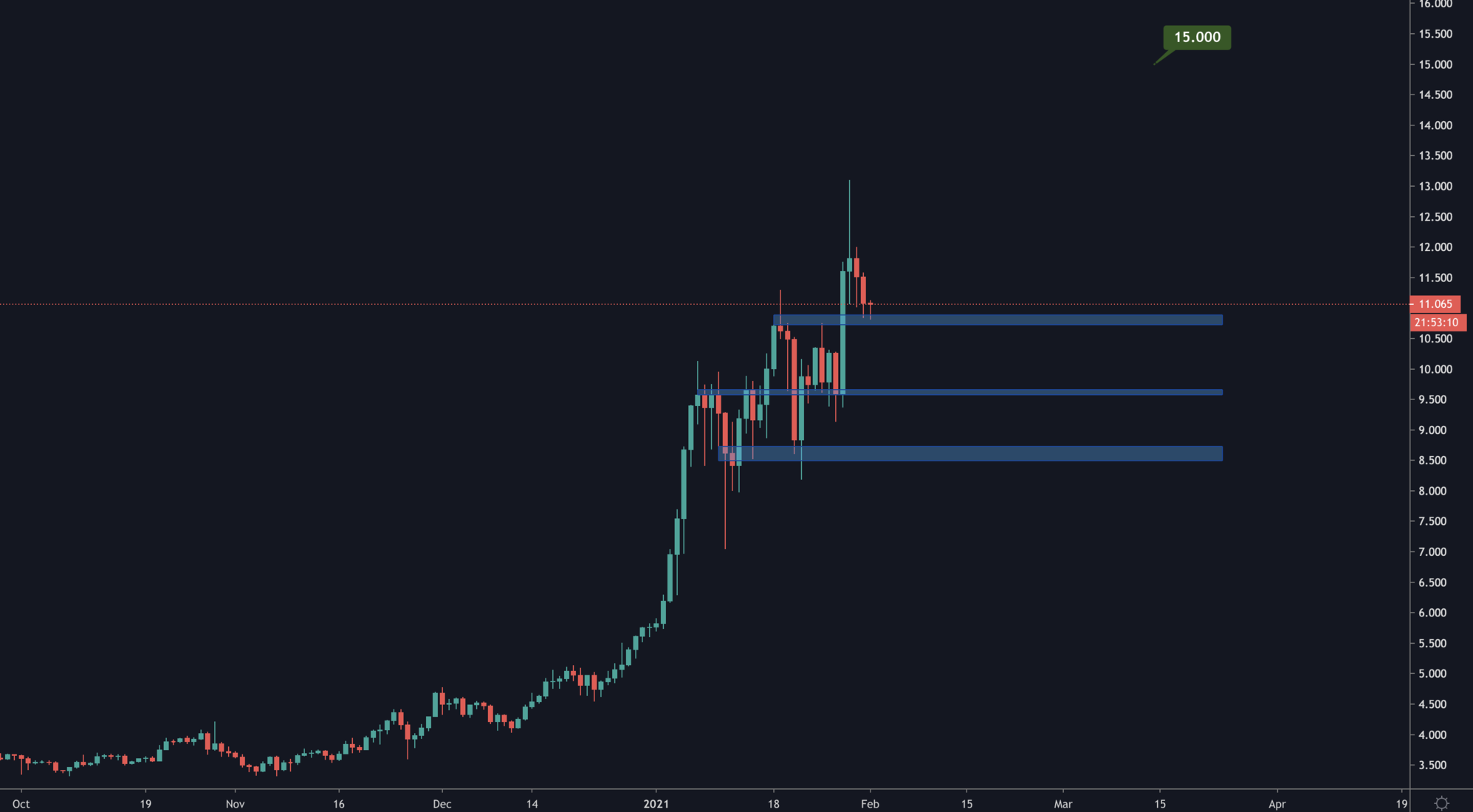 FTT is also grinding higher with the creation of new highs and retests of the previous ones for support. As long as this remains valid, the next target if $15. 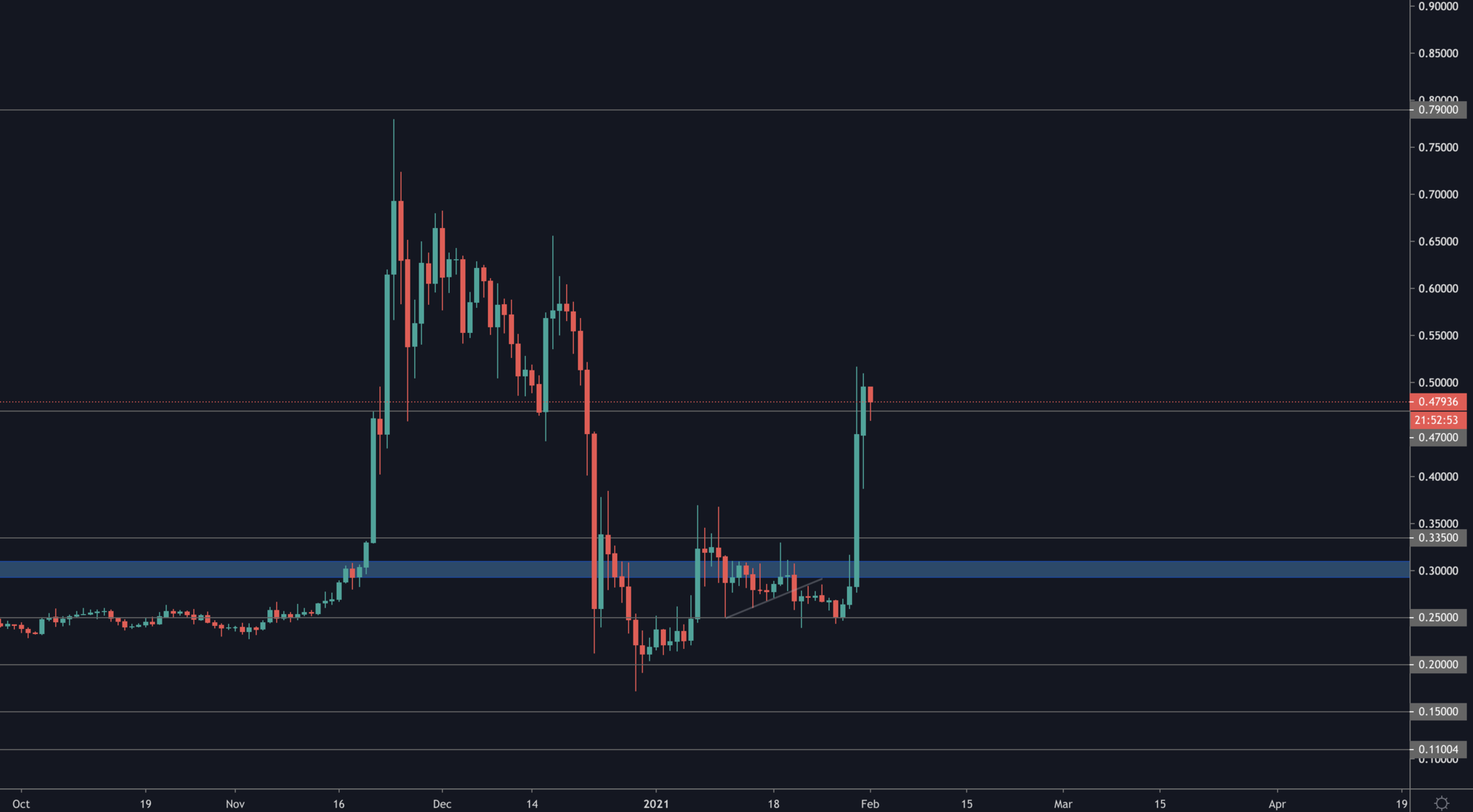 From a technical perspective, XRP broke $0.47 which can lead towards $0.79. However, we will state that you must be very careful because of the “public pump” being coordinated in a Telegram group.

Disclaimer: NOT FINANCIAL ADVICE. These are all opinions and should NOT be taken as financial advice nor any sort or recommendation under any circumstance. 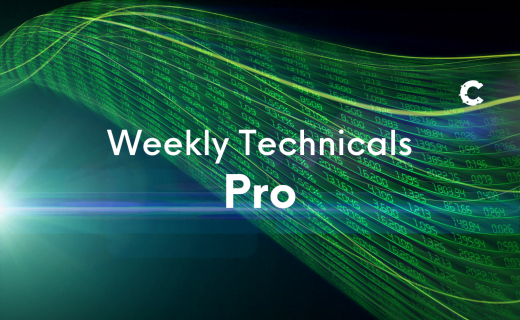 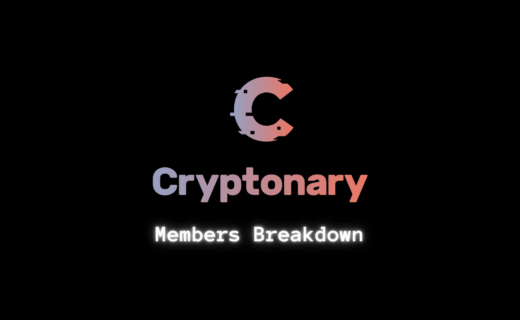