“The time to repair the roof is when the sun is shining.”

Protecting assets against a future calamity is an essential part of risk management. Insurance is available for pretty much anything that has value: your phone, your car, your house, and even your life.

Decentralised insurance aims to address the inefficiencies in the conventional insurance industry by reverting the system back to a community-based model rather than the adversarial system, currently dominated by large institutions, bringing the mutual ethos back to insurance.

The utilisation of blockchain technology for insurance simplifies issues such as fraud detection and removes a lot of the bureaucracy that plagues the traditional insurance sector: a third of the total US healthcare spend in 2017 (more than $800bn) was spent on administration, an incomprehensible waste of resources.

Insurance premiums are a way of quantifying the risk taken on by the insurer in the form of regular payments for coverage. In CeFi insurance, premiums are determined by the insurance company only after they have assessed the risk, they have decided when the liability is realised, and they decide when a payment is issued to the claimant – doesn’t sound good when you put it like that!

The purpose of DeFi is the disintermediation of the financial system and so by definition DeFi insurance seeks to remove them from making all the decisions, providing a medium where the setting of premiums and pay out conditions are made by a collective and/or are algorithmically generated through intuitive application of smart contracts and blockchain technology.

DeFi insurance presents an opportunity for participants to hedge their risk against smart contract failures that have caused considerable trauma in the past. But it is not just about protecting capital – insurance is a cornerstone of the CeFi system and so DeFi insurance is a natural step forwards in the development and mainstream adoption of the open finance ecosystem.

Let’s dive in and take a look at some of the projects, how they operate and what they aim to achieve in the future!

Nexus Mutual describes its-self as “a people-powered alternative to insurance”. But what does this mean? Well, the term mutual when used in a financial context describes an entity that is owned by, and run for, the benefit of its members all of whom are actively and directly involved in the business, rather than being owned and controlled by outside investors.

Currently, Nexus Mutual products include Smart Contract Cover and Custody Cover for ETH. Smart Contract Cover provides protection against hacks in value-storing applications, an example of which would be the Yearn Finance hack in September 2020. They cover a wide variety of contracts including Aave, ETH 2.0 and SushiSwap.

Custody Cover allows protection of funds held in centralised exchanges in the case of a hack, or if withdrawals from the exchange are halted for more than 90 days. Currently covered exchanges include Coinbase, Kraken, Binance and Gemini.

Built on the Ethereum public chain, Nexus allows anyone to become a member and buy cover – in fact you need to be a member to buy cover. Membership rights are represented through their token, $NXM. Participation in the mutual is incentivised in the form of new $NXM tokens issued to active members as a reward, similar to how mining works – instead of providing computing power to a pool you provide your time and capital.

Claims assessment is carried out by active members using a voting process, outlined below: 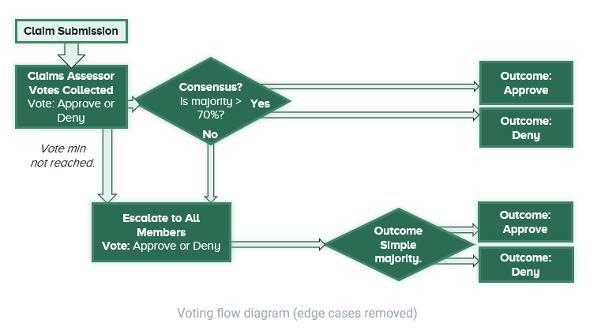 Each assessors vote is weighted proportionally, according to the amount of tokens they have staked.

Why would members vote to pay the claim, you ask? Claims Assessors stake a portion of their tokens. In extreme cases, these tokens are liable to be burned if an assessor is found by the Advisory Board to have voted fraudulently. On the other hand, assessors benefit from voting with the consensus via token rewards and so the mutual is self-regulating.

If legitimate claims are paid out regularly, the credibility of the mutual as an insurer is proven; attracting more members and increasing the capitalisation of the fund as a whole, which is long term beneficial.

Nexus has a few trade-offs that prevent it from being a truly decentralised model:

Operational limitations include the fact that coverage can only be purchased separately for each protocol and for pre-specified set amounts. Additionally, once purchased, coverage contracts cannot be refunded, resold or modified.

As explained earlier NXM tokens are membership tokens only issued to members (KYC verified), however members are able to wrap their NXM tokens to the tradable token wNXM. The latter is traded on the secondary market and does not require KYC to own. However, it also does not give its holders any membership rights like NXM holders. Unlike NXM, which can only be bought and sold on the Nexus Mutual platform, wNXM is available on exchanges. Under normal circumstances 1 wNXM = 1 NXM.

Let’s have a look at the tokenomics of NXM more in depth.

The price of NXM is determined by a bonding curve which correlates with the amount of capital available to the mutual and the capital required to pay out all claims with a certain probability. The MCR is the Minimum Capital Required (remember, capital is raised through the purchase of NXM by members) – if the MCR% () drops to ~100%, then NXM cannot be redeemed for ETH from the mutual. This creates a dilemma for members – if I can’t exchange my NXM through Nexus Mutual, what can I do? They have the option to wrap it and sell it on an exchange as wNXM.

For the vast majority of the time the MCR% is above the required threshold and so NXM is freely exchangeable by members – wNXM is kept at rough price correlation with NXM on exchanges by arbitrageurs. However, during periods of liquidity shortage the price of wNXM can drop substantially when wNXM floods the market as members, unable to exchange NXM through Nexus, sell their wrapped NXM on the secondary market.

Note than when the MCR% drops below the required ratio, the price of NXM drops to incentivise capital providers to invest in an effort to fill the capital pool to acceptable levels. Conversely, if the MCR% is too high, the price of the token increases thus incentivising holders to cash out in order to reduce the capital in the pool. This simple capital management strategy maintains the health of the mutual. Since wNXM cannot be used in any meaningful way until unwrapped by a member, its price is always lagging NXM as you can see on the chart above. This temporary issue would be fixed in full only once more capital is added into the pool.

It operates a PAYG (pay as you go) model, with flexible options for duration and the amount of coverage required. Armor.Fi is partnered with Nexus Mutual, who underwrites the Armor network coverage.

Armor has several features that differentiate it from Nexus:

As mentioned previously, the Armor network coverage is underwritten by Nexus Mutual and so the claims process incorporates the Nexus claim assessment described above, with Armor governance replacing the Nexus Claims Assessors in the first instance of a claim.

Singapore-based insurance protocol InsurAce is another player on the field looking to attract customers and investors alike, and aims to provide “reliable, robust and carefree DeFi insurance services to the DeFi users, with very low premium and sustainable investment returns.”

InsurAce plans to utilise the same mutual insurance model as Nexus Mutual in a complementary role, but with some distinct features:

Cover Protocol differs from the other protocols mentioned in that it uses a fungible-token, peer-to-peer system rather than NFT wrapped contract based coverage. Although this is less versatile than wrapped contracts, it allows the market to set coverage prices as opposed to the bonding curve used by Nexus, Armor and InsurAce.

Two fungible tokens are minted when a user interacts with the smart contract –CLAIM and NOCLAIM. The holders of the CLAIM tokens receive compensation in the event of an approved claim and, as you have probably already guessed, NOCLAIM token holders receive the collateral if the contract expires with no claims.

The claims process is similar to Nexus Mutual, with a CVC(auditor) taking the final decision on whether or not to approve a claim.

Cover Protocol was the subject of a massive security breach in December 2020. Hackers exploited a coding bug within the BlackSmith.sol liquidity and farming contract, allowing them to mint COVER tokens at will to the tune of 40 quintillion (that’s 30 zeros – previous supply was in the thousands at the time). Some tokens were used to provide liquidity to the balancer pool resulting in the theft of $4million of WBTC, ETH and DAI, massive collapse of the price of COVER and made headlines across the crypto space.

In an odd twist the hackers revealed their identity:

1. No gains.
2. The Obtained Funds from LP has been returned to COVER.

The hackers returned the stolen funds (4350 ETH), however massive damage to the reputation and reliability of Cover Protocol was done. This ethical hack was likely a publicity stunt, and indeed the price of GRAP surged thousands of percent in the 48 hours after the hack. However, the exploit revealed the potential havoc that can occur when the security of a project is compromised and it is even more damaging when you consider that it was an upcoming DeFi insurer subjected to this attack.

Cover Protocol used the returned ETH to reimburse clients and has since launched a new COVER token with a compensation plan allowing distribution of the new token to those affected.

Please note that since the release of this article, Cover Protocol has halted operations and is closing down. Read more here.

NSure Network uses a Dynamic Pricing Model to determine premiums. Supply and demand is used to set premium prices – the more policies sold the higher the premium price. Regular payments are controlled by the capital supply, a higher capital pool equates to a lower regular payment.

Utilising a similar governance procedure as the other providers, NSure token holders are also able to:

Claims assessment also differs from the other systems: 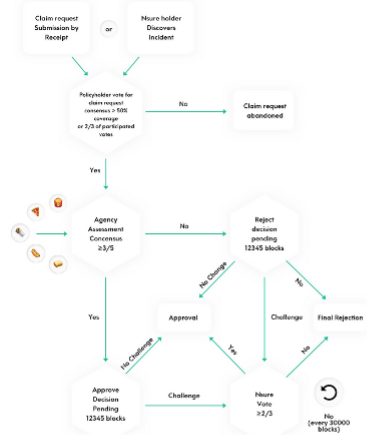 Looks complex? It’s not really, the only major changes to the claims process to that of Nexus is that it can be carried out in 3 phases as opposed to two. Here’s a rundown:

The world of decentralised insurance is in its infancy with the potential to dramatically improve not only the fairness of the insurance industry as a whole, but additionally both the speed of customer service/payouts as well as the efficiency of operations that all culminates in cheaper and more effective insurance for consumers.

Of course there are clear limitations, mainly routed to hacks and poor product-market-fit, and that is the natural progression of any innovative product. By far, these protocols are the most prominent and promising ones today.

Insurance will get decentralised. Watch this space! 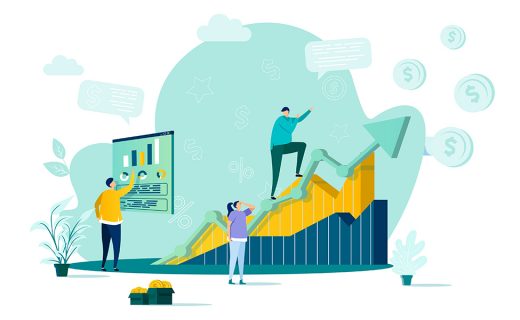 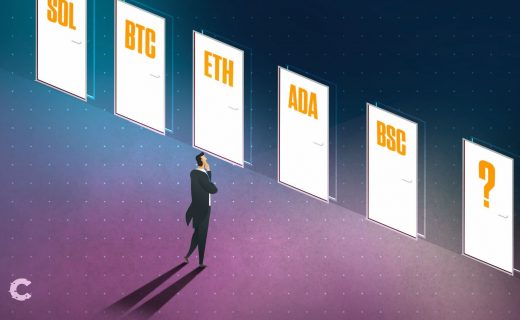