How can U.S. companies allocate their $2.5 trillion cash piles

2020 was a watershed year due to the coronavirus pandemic and its effect on businesses, the global economy, and the financial well-being of companies.

U.S. companies borrowed $2.5 trillion from the bond markets last year. The funding is very important for the survival of some of the businesses. Others have already gone under.

There are solid hopes that life might return, albeit in limited form, to the pre-pandemic era as coronavirus vaccines are distributed to the people. The aviation industry could bounce back as more passengers begin to travel again.

And while the situation plays itself out, the biggest question that remains is “how do companies allocate the vast amounts of cash sitting in their balance sheets.”

Converting part of a company’s treasury into bitcoin a few years ago was improbable. And only company chiefs ready to put their jobs on the line thought of doing it. The trend has changed as more companies, and now even cities, are thinking of investing in bitcoin.

In August last year, Michael Saylor, the CEO of the business intelligence software firm Microstrategy made a big and bold bet when used nearly $500 million in company funds to buy the highly-volatile bitcoin.

Less than three years earlier, bitcoin made an incredible run to peak at nearly $20,000 in December 2017. Then the bubble burst and the digital currency spent the following year reversing its gains, and the next on a recovery path.

But for Saylor and his publicly-traded company, this was just the beginning of an aggressive bitcoin buying spree that culminated in the firm spending at least $1.1 billion in purchasing the digital asset.

Microstrategy now owns 71,079 bitcoins, and their value has more than doubled.

What the numbers say

Apart from the bitcoin paper profits, Microstrategy’s investors could be the real winners in the bitcoin bet.

The buying spree, described as a “capital allocation strategy” might have contributed to the company’s share price surge of nearly ten-fold since the bitcoin acquisition began.

Tesla, an innovative electric car maker led by its maverick CEO Elon Musk, treaded in Microstrategy’s terrain when it bought bitcoins worth $1.5 billion.

The firm’s war chest – 43,053 bitcoins – has grown to over $2.1 billion. And this is within a space of one month since the company made an investment in the digital asset.

This equates to paper profits of more than $600 million.

This is by far no easy feat, at least given Tesla’s financial history. Despite a runaway surge in share price last year, Tesla made an annual profit of over $700 million in 2020, the first time that the company was in the green. 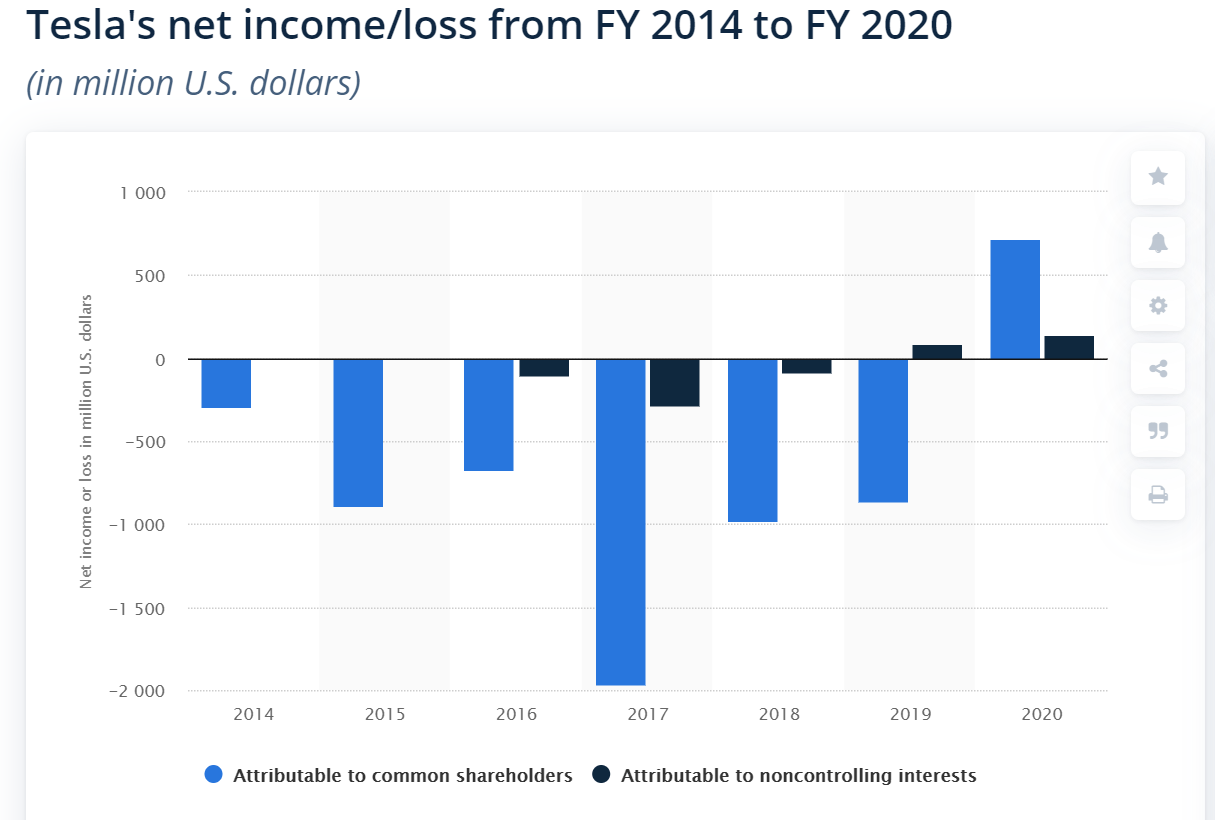 Tesla turned a net profit of over $700 million in 2020, the first time it has been profitable. |Source: Statista.com

For Tesla, buying bitcoin is a way of diversifying and maximizing return on cash.

Microstrategy inspired companies such as Sqaure Inc. and Tesla among others to invest in bitcoins.

This is a story familiar to many, but its ramifications could be far-reaching, and eventually, the pay-off of the company’s bet could push other companies in a similar direction.

But not all financial executives have the same risk appetite as the eccentric Taylor, Musk, or Jack Dorsey who invested $50 million of Square’s treasury into bitcoin.

Corporations that want exposure to bitcoin in the form of a security and without going through the hustles of buying and safekeeping BTC can do so using investment vehicles such as the Grayscale Bitcoin Trust (GBTC). GBTC share price has risen over the years. 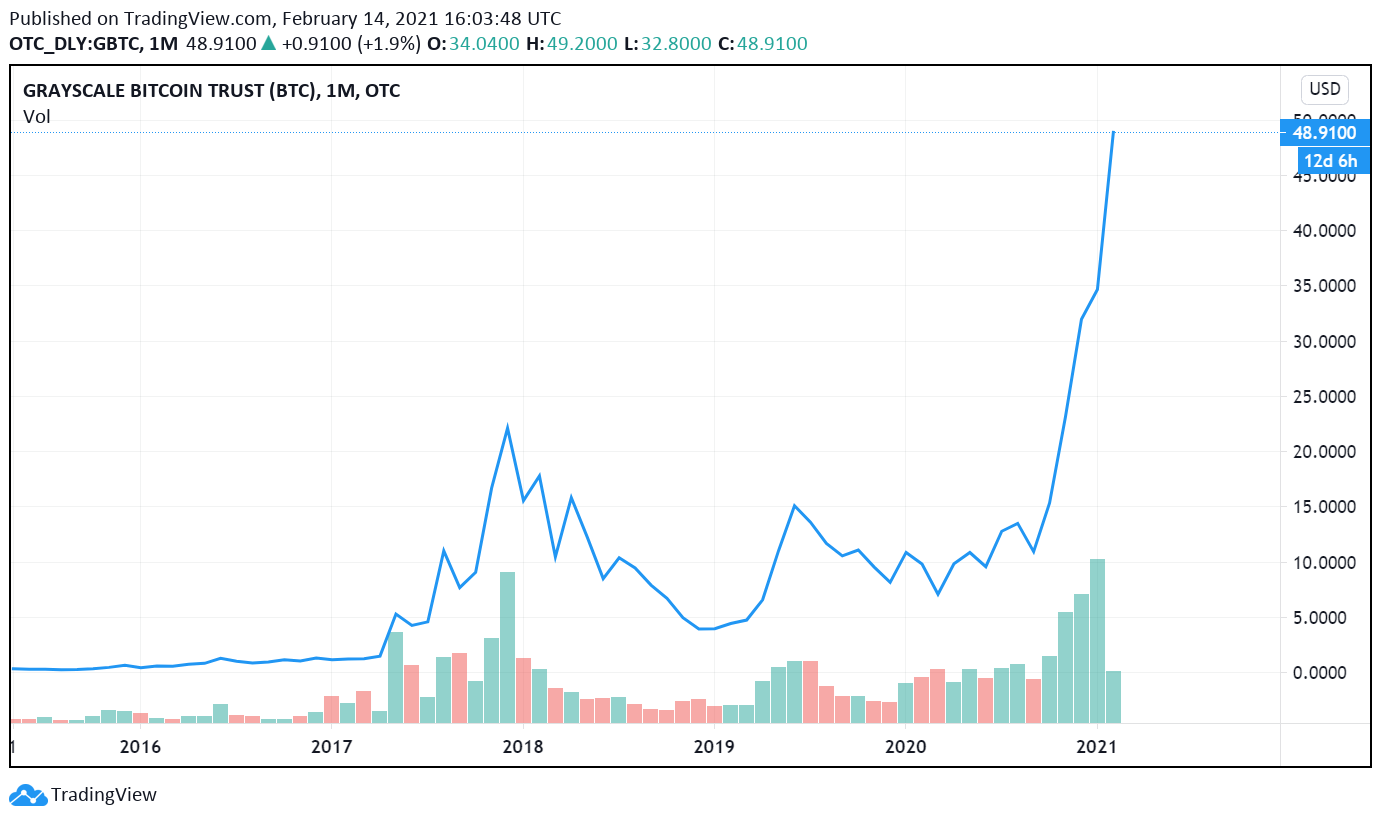 Bitcoin was outperformed by other cryptocurrencies in 2020. Despite this, it has gained a lot of attention from institutional investors.

It was the best-performing institutional asset of 2020 after surging more than 300% in the year. Gold, the traditional safe-haven asset, was up 28% in the same period. 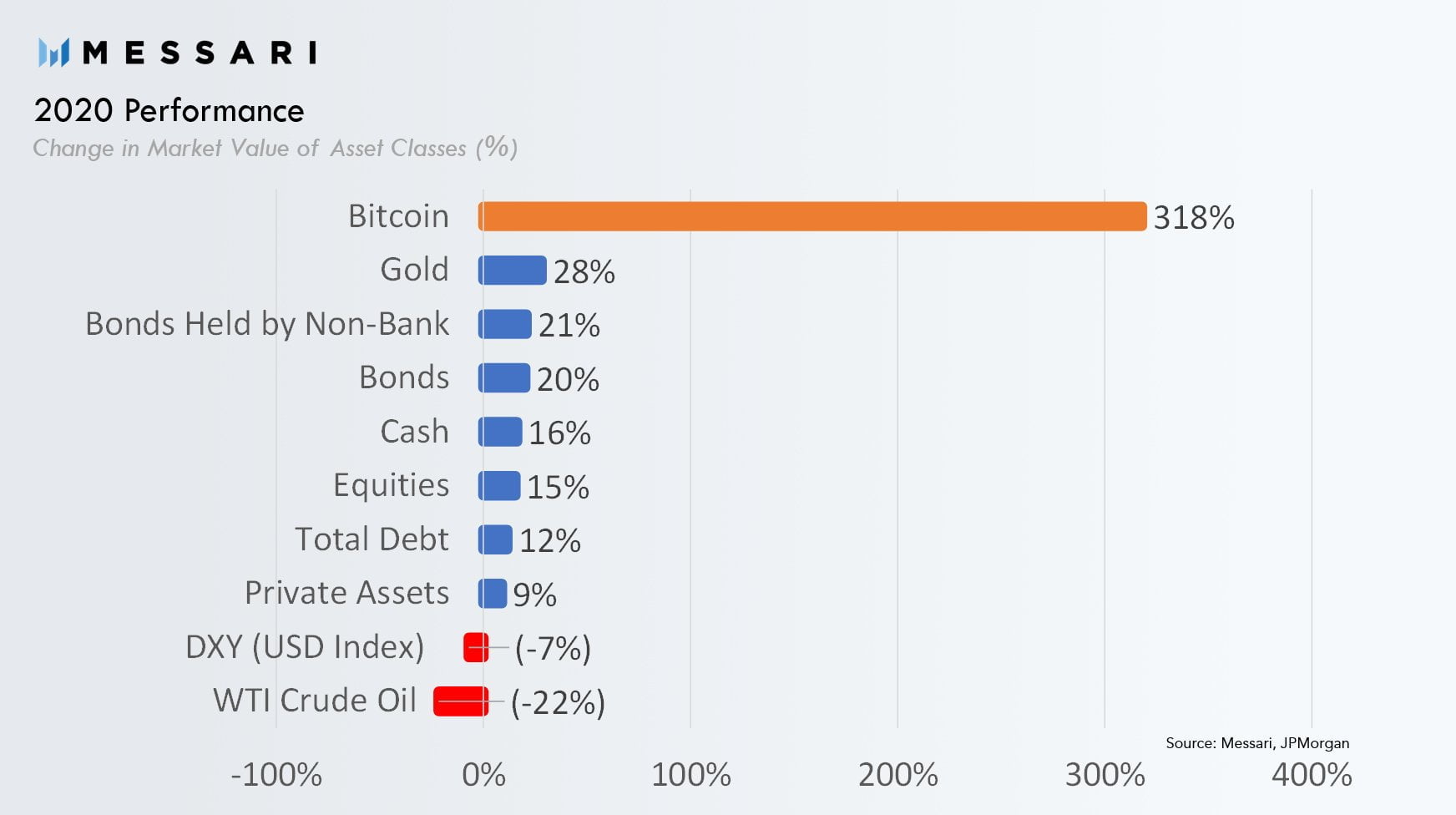 Bitcoin was the best performing institutional asset of 2020. | Source: Messari

Some companies would still prefer to bet on traditional financial instruments instead of bitcoin because of the risk associated with the digital asset. Other corporations might take note of bitcoin’s institutional-fuelled bull run and think that it’s 2017 all over again.

Companies can do what they have always been doing in allocating their treasury. They could alter this a bit because of the high scale of borrowing in 2020.

Giving back seems reasonable as some of the companies borrowed excessively. It would go a long way in reducing debt and undoing the ‘borrowing spree’ of last year.

Investing in the business

The cost of borrowing is very low at the moment and could discourage companies from reducing their debt. Instead, they can opt to invest the cash into the business.

Companies can either buy back their stock or go for bold moves such as acquisitions. Analysts expect banks to splash $10 billion on stock repurchases this quarter.

Some strategists believe that due to an uncertain economic outlook, companies might prefer to hold the surplus cash and use it whenever the need arises.

The economy could be rattled further as the world is still not yet out of the woods yet. The pandemic is still on.