Ethereum smashes past $2K: A glance at the past, the present, and the future

Ethereum, the second-largest cryptocurrency by market cap, blasts through the $2,000 level, reaching an important milestone in this supercharged bull run of some sorts. 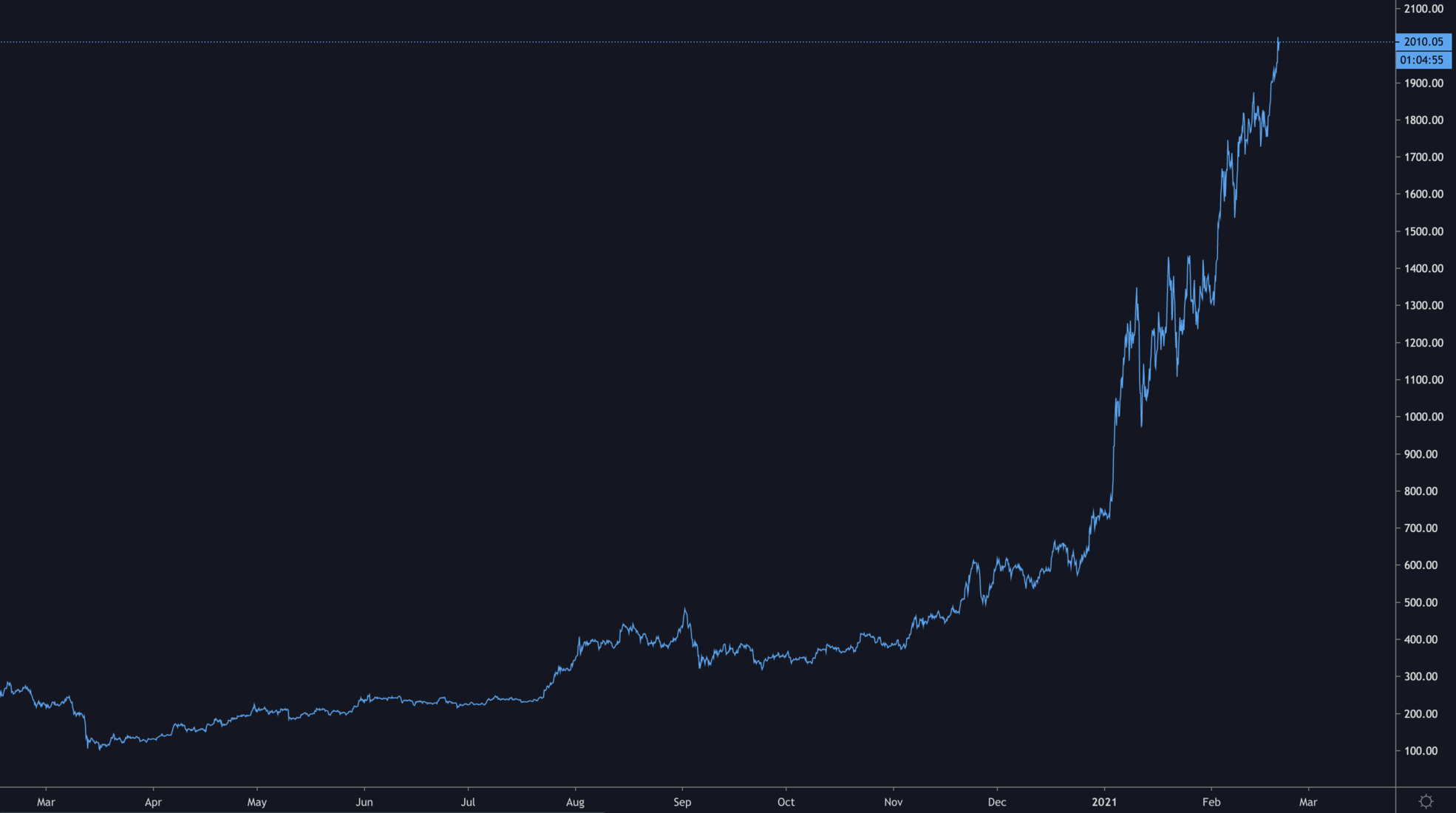 Since the start of the current bull cycle, bitcoin has been in the spotlight. If it is not smashing new records, then it is a new major company, public or private, converting its balance sheet into the king of cryptocurrencies, at least by market cap.

Today, Ethereum finally hits a major milestone as it tastes the $2K level for the first time.

Without a doubt, Ethereum is one of the most used blockchains in the crypto industry. Through its smart contract capability, the blockchain was one of the major reasons for the success of the 2017 initial coin offering mania.

Until the bubble burst and ICOs were no longer a thing.

However, as the decentralized finance (DeFi) movement grew, it became clear that Ethereum would be the blockchain of choice.

2020 was a banner year for Ethereum as the network hosted 96% of all DeFi transactions.

To put things into perspective, the DeFi sector was worth just over $1 billion a year ago, but now, it is valued at nearly $42 billion.

The growing DeFi sector could have been Ethereum’s undoing as gas fees increased exponentially. Competitors failed to capitalize on this to grab a bigger chunk of the market.

Ethereum survived a big scare. And it continues to march on as one of the most important blockchain networks, which is now reflected in its price hitting $2,000 for the first time ever.

The launch of Etherum 2.0

The much anticipated Ethereum 2.0, the biggest upgrade in the history of the blockchain protocol, went live on Dec. 1, 2020.

Ethereum 2.0, or Serenity, in development since 2015, was designed to transform the protocol from a proof-of-work consensus algorithm to the next-generation proof-of-stake.

The successful launch of the Beacon Chain meant that Ethereum had successfully completed its first stage as it transitions to a more secure, scalable, and sustainable blockchain.

And with this new transition that is still in the works, the Ethereum network will be able to compete with the likes of Visa and PayPal in terms of processing speed.

While several blockchains have been created to act as “Ethereum killers,” the network is still standing.

Despite a long road ahead, for today, the Ethereum community will savor this moment as they celebrate the new magic number: $2,000.