A partnership between two decentralized finance (DeFi) protocols has broken down.

Yearn Finance and Cover made separate announcements today that they are partying ways.

Cover, a decentralized and permissionless coverage protocol that protects users against exploits and rug pools among other things, announced in a tweet that the partnership was down and under, but did not provide further details.

Cover has parted ways with Yearn. You can still buy Yearn coverage on Cover protocol. All Cover Products' roadmap and timeline are not affected.

Yearn Finance also announced that “we have decided to end the previously announced merger process of Yearn and Cover.”

We have decided to end the previously announced merger process of Yearn and Cover. Both protocols will continue to operate independently. yVault depositors who have previously purchased Cover protection are unaffected by this.

No reasons were given for the breakdown of the partnership.

However, Yearn founder Andre Cronje came close to providing what may have happened. It seems that a lack of trust and faith caused the breakdown.

“Personally, this was very sad to see. I had very high regard, trust, and faith in the Cover team. Lesson learned. Won’t trust them again,” said Cronje.

“The two teams working together as one will help optimize, enhance, and amplify the work that is already underway. Yearn can focus on its best-in-class vaults, while Cover becomes the backstop coverage provider for the Yearn product suite, as well as for DeFi as a whole.”

The latest development will likely have a negative impact on the price of COVER. 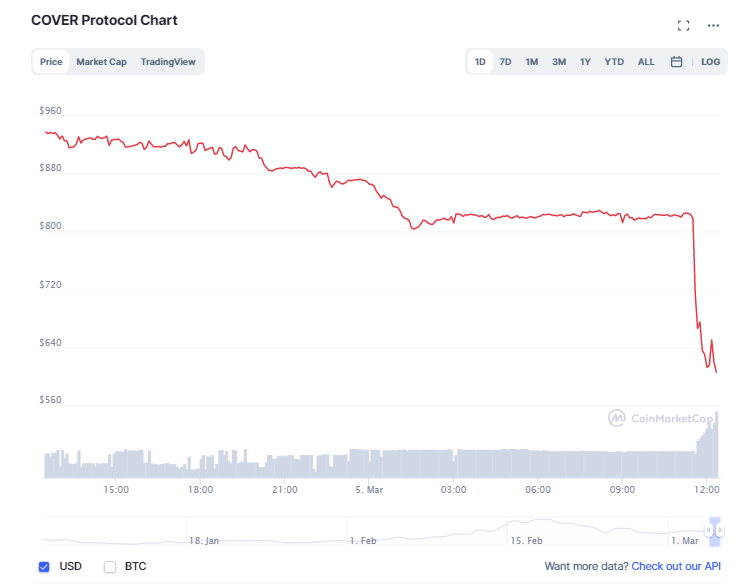 Some members of the Cover community are not happy about the development as forming new partnerships has been a key driver in propping up crypto prices. Losing one could have the opposite effect.

For now, the majority of people want to know the full story and the reasons that led to the partnership breakdown.

COVER token holders have to come to terms with another major price drop. The token tanked more than 75% in December after a white hat hacker exploited the protocol.

A month after a merger between the protocols was announced, a “white hat” hacker exploited Cover Protocol and minted 40 quadrillion COVER tokens.

However, the token’s price recovered after the hacker returned the funds.