Solana is a smart contract-based, open-source blockchain designed to host decentralised applications. It was founded in 2017 by Solana Labs and Founder Anatoly Yakovenko.

Solana uses the ticker symbol SOL and rose to fame in 2021 after soaring 12,000%. The key elements that make Solana so special are the number of transactions it can handle per second and its affordability. Solana aims to solve the speed, cost, and scalability problems other blockchains (such as Ethereum and Binance Smart Chain) face.

Transaction costs are around 100th of one penny per transaction. Compared to Ethereum’s extremely high gas fees. 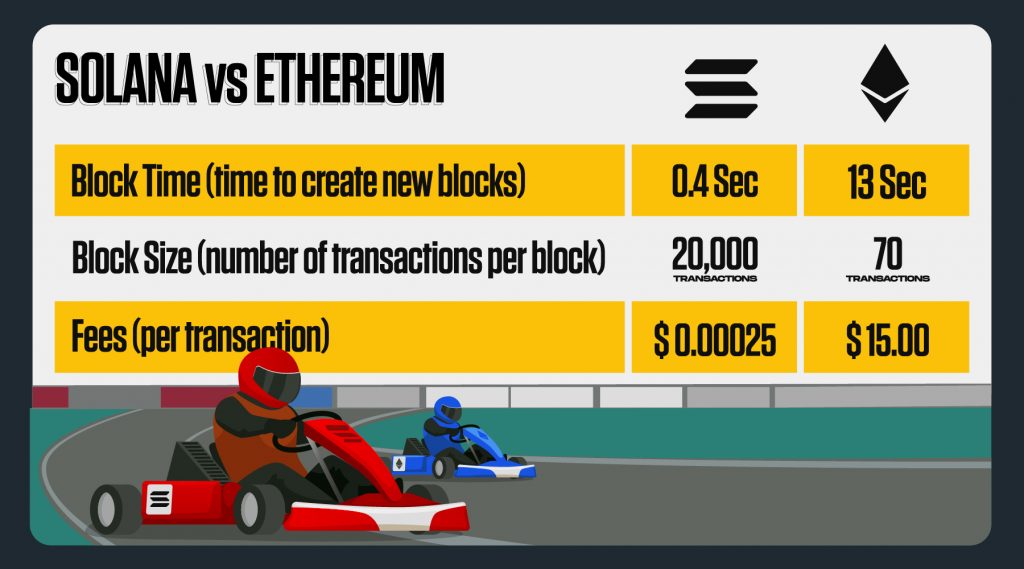 An affordable alternative to Ethereum

When playing around with applications on both Ethereum and Solana you’ll see a big discrepancy between the costs of doing so. As of January 2022, many people have exclusively switched to Solana for their experiments in decentralised finance and NFTs.

The affordability comes from the proof of stake (Pos) foundation that Solana is built on. We talk about this consensus mechanism more about in our Simply Explained: Ethereum piece. Essentially, Instead of miners being rewarded for their efforts through proof of work (PoW), stakers are rewarded with a percentage of transaction fees. This removes the huge gas requirement necessary to counterbalance the computational power used by validators in PoW.

The fastest blockchain in the world

What makes Solana so fast? Let’s take a look.

Solana has a feature called “sea level”. This gives it the ability to run smart contracts in parallel. With other smart contract platforms like Ethereum, if you need 5 tasks to check off a list, you’d have to complete them one at a time.

With Solana, you can do them at the same time. Imagine you need to fold the laundry, mow the lawn, wash the dishes, iron your clothes and feed the cat. This would take quite a while right? Imagine being able to duplicate yourself by 5 and do them all at once. That’s sea level.

Most blockchains face the issue of agreeing on when a transaction is confirmed. Adding PoH removes this issue. Regardless of when a block is received, the timestamp allows validators to produce other blocks without waiting for the rest of the network to agree. It essentially synchronises everyone in the network!

Instead of blocks (validations) being confirmed, then ordered, and then added to the blockchain to approve the transactions, validations are confirmed, blocks are made, the date is attached and then the blocks are ordered. This speeds up transactions further. Proof of history in itself is quite complex so we will go into it further in a separate piece.

Here’s a very unrealistic analogy to better explain it. Imagine we lived in a world where proposing to your partner was done by mail. You send a letter to your partner asking them to marry you. They get your letter and are overwhelmed, they write back denying your request.

A few days later, they have a change of heart and write back accepting your proposal. Unfortunately, both letters are stuck in the mail and you receive the acceptance first, and the rejection second. The miscommunication is problematic as you can see. You would have to connect at some point to clarify the misunderstanding. Adding PoH essentially adds a date to all of these letters so regardless of the order received, the understanding is clear.

The Tokenomics of Solana (SOL)

Let’s take a look at few basic pieces of information on Solana. Its token SOL is a utility token used to power the Solana blockchain similar to ETH and BNB. There were initially 500 million SOL tokens issued, and 300 million are currently in circulation. SOL is unique in the sense it’s both deflationary and inflationary. Deflationary because around 50% of the transaction fee is burned, and inflationary because as staking rewards are given to stakers.

SOL blew up over 12,000% in 2021 and was initially posed as an Ethereum killer. The team behind Solana do not echo this message, and neither does the team at Cryptonary. There is more than enough room in the space for multiple smart contract blockchains and there are plenty of differences to separate them.

Cryptonary discussed Solana earlier in the year when it was around the $10 mark, its currently a part of our portfolio, and we expect a bright future. Check out our premium article here for an in-depth breakdown of Solana and its potential.