Chapter One, a venture firm based in LA, has decided to support innovative startups by launching its first web3 incubator, Studios.

Chapter One recently closed a $40 million early-stage fund focused on investments in web3. However, it appears that this was just the beginning of the adventure, as the company has decided to launch a web3 incubator called Studios. With Studios, Chapter One will offer three teams $1 million for a 15% stake in their companies and work with them for six months to reach product-market fit. 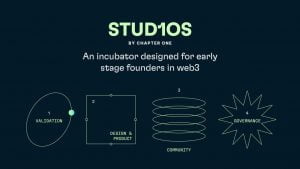 In addition to capital, Studios will provide the teams with weekly product and design sessions, access to various advisors from across the web3 ecosystem, and the ability to find enough talent to scale their startups, build relationships with partners from the web3 ecosystem, and find strategic LPs to develop strategies for their product and design.

Chapter One has taken a different approach

The six-month program will go live in April after accepting applications for the next month. Interestingly, unlike traditional incubators and accelerators, which often focus on quantity rather than quality, Chapter One wants to pave the way for a smaller group of projects and take a more personal approach. The venture firm plans to support teams working on products such as cross-chain interoperability, combining DeFi and NFTs. Still, it hopes teams can surprise them with fresh and exciting solutions or ideas.

‘We’re excited to support and back exceptional founders and to really get in the weeds on areas like product development, road mapping, and design. Each company in our first season of Studios will have personalized attention from our team and our community of mentors’- Says Mene Mazarakis, Co-lead of Studios

Chapter One’s team is made up of a group of people who have been involved in the development of startups and have experienced the growth stages of a startup. Before founding Chapter One, Jeff Morris Jr. was VP of product at Tinder. Mene Mazarakis, co-lead of Studios, was an early product manager at Diem (formerly known as Libra). Maria Tanagarova, Studios’ other co-lead will lead Founder Experience and support product operations. Since its inception, the venture firm has backed various crypto companies and projects, including MoonPay, Syndicate, The Graph, and Wonder.