The largest cryptocurrency exchange Binance, tweeted the following picture leaving the community wondering what’s next for the exchange. The tweet caused a 10% increase in BNB’s price based on pure speculation, proving itself as a typical “buy the rumor, sell the news” case. 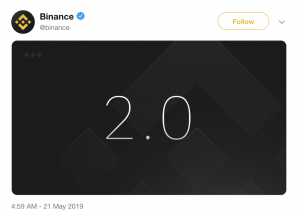 Although no further information was released from their part, there have been different rumors revolving around the next upgrade to be made by Binance. In the start of May, a Reddit user found that the exchange had enabled the margin trading flag for 9 trading pairs in the Binance API. A BTC/USDT pair and USDT & BTC pairings for ETH, BNB, XRP, and TRX. So far Binance has been offering basic features on its exchange, enabling margin trading will take it to the next level as many users have been awaiting it.

Another possible outcome, one that has been mentioned by CZ himself (CEO of Binance), is the addition of One-Cancels-the-Other (OCO) order type. It allows traders to mitigate risk by automatically cancelling one order when the other one is executed. It works by combining a stop order and a limit order.

We have had a 2.0 upgrade from another popular cryptocurrency exchange in the past: KuCoin. Their newer version included a user-experience (UX)/user-interface (UI) upgrade alongside 10 new features. The newly added features ranged from price warnings to new order types.

Despite not having heard from Binance to confirm what the upgrade will include, we know the different probable outcomes. It will likely be one of the mentioned upgrades or a combination of them. Binance is not stopping there however, they also recently launched their new decentralized exchange: Binance DEX and will be adding more tokens on that platform soon.