BitPay, one of the leading providers of bitcoin and cryptocurrency payments services, integrated support for Apple Pay to facilitate easier transactions.

BitPay CEO Stephen Pair, who co-founded the company with Tony Gallippi in 2011, said the firm has thousands of users looking for new ways to spend their digital assets.

“We have thousands of BitPay Wallet app customers using the BitPay Card who are always looking for new places and ways to spend their crypto,” said Pair.

The CEO added that they will integrate Google and Samsung Pay. This will expose millions of people to crypto and accelerate its adoption.

“Adding Apple Pay and soon Google and Samsung Pay makes it easy and convenient to use the BitPay Card in more places from day-to-day items to luxury purchases,” he added.

Users need to have the latest version of the BitPay to be able to add their cards to Apple’s Wallet app.

The BitPay wallet app allows users to hold and spent bitcoin, and also convert it into fiat currency and spend it with the BitPay Card. It supports several cryptocurrencies that include the usual suspects: Bitcoin, Bitcoin Cash, and Ether as well as dollar-pegged stablecoins, USDC, GUSD, PAX, and BUSD.

Apple Pay can expose millions of users to crypto

Released in 2014, Apple Pay is a mobile payment and wallet service offered by the tech giant Apple.

It allows users to make purchases in person, on iOS apps, and on the Safari browser. 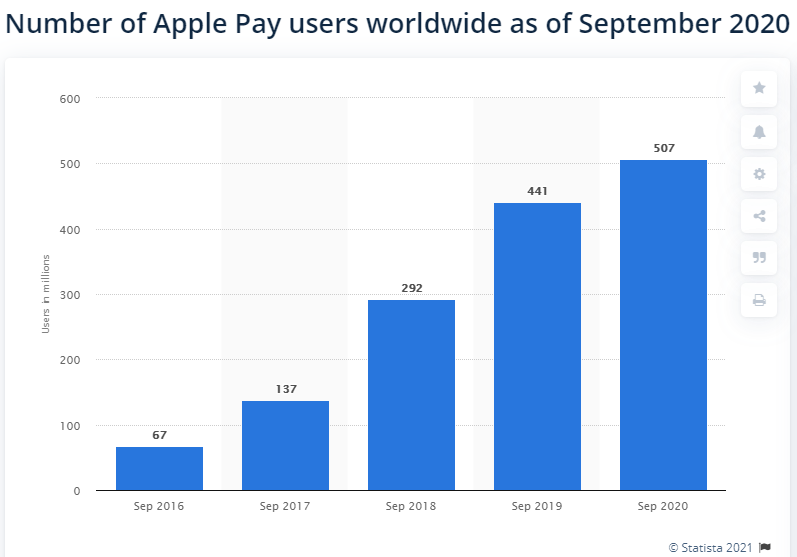 Apple getting into cryptocurrency

According to a recent research report by RBC Capital Markets, it is high time that Apple makes the jump to cryptocurrency.

The report said that the tech giant could generate $40 billion if it launches its own cryptocurrency exchange.

Several payments companies are making their moves into the nascent industry. PayPal, which has a crypto footprint in the U.S. since late last year, is expanding its digital asset business to the UK.

Mastercard is integrating cryptocurrencies into its financial network whilst its competitor Visa is still in the thinking phase.