The U.S. Treasury Department, through the Financial Crimes Enforcement Network (FinCEN), proposed Friday a new rule that requires exchanges, banks, and money service providers (MSBs) to verify the identities of users who engage in certain transactions. Instead of the usual pullback that could take the steam out of the current bull run, bitcoin has extended its gains, this time, surging above $24K and registering a new all-time peak.

However, the price range above $24,000 seemed too big for bitcoin which quickly ran out of steam and fell below $23,800. 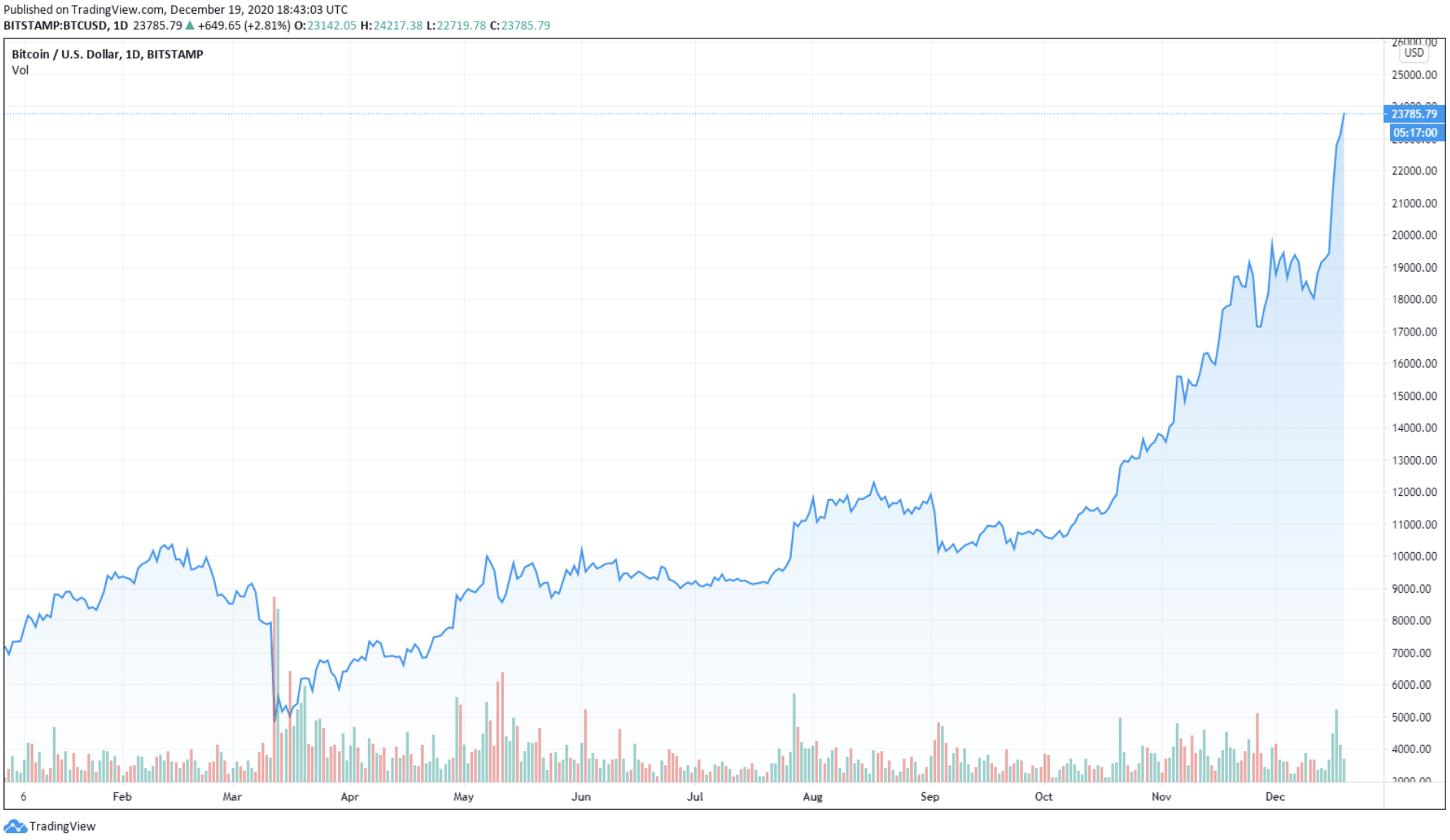 Despite the drop in momentum and price, bitcoin is having a stellar run that has seen the cryptocurrency register new peaks in a space of a few weeks. Bitcoin reached an all-time high of just below $20,000 on December 17, 2017. It took the asset three full years to break its own record and set a new peak.

However, in the past few days, bitcoin has been in the business of setting new highs and defying expectations.

In the past seven days, bitcoin has gained 28.97%. Comparing it with other top 10 digital assets, it is only second to Litecoin which is up 55.41% in the same period. 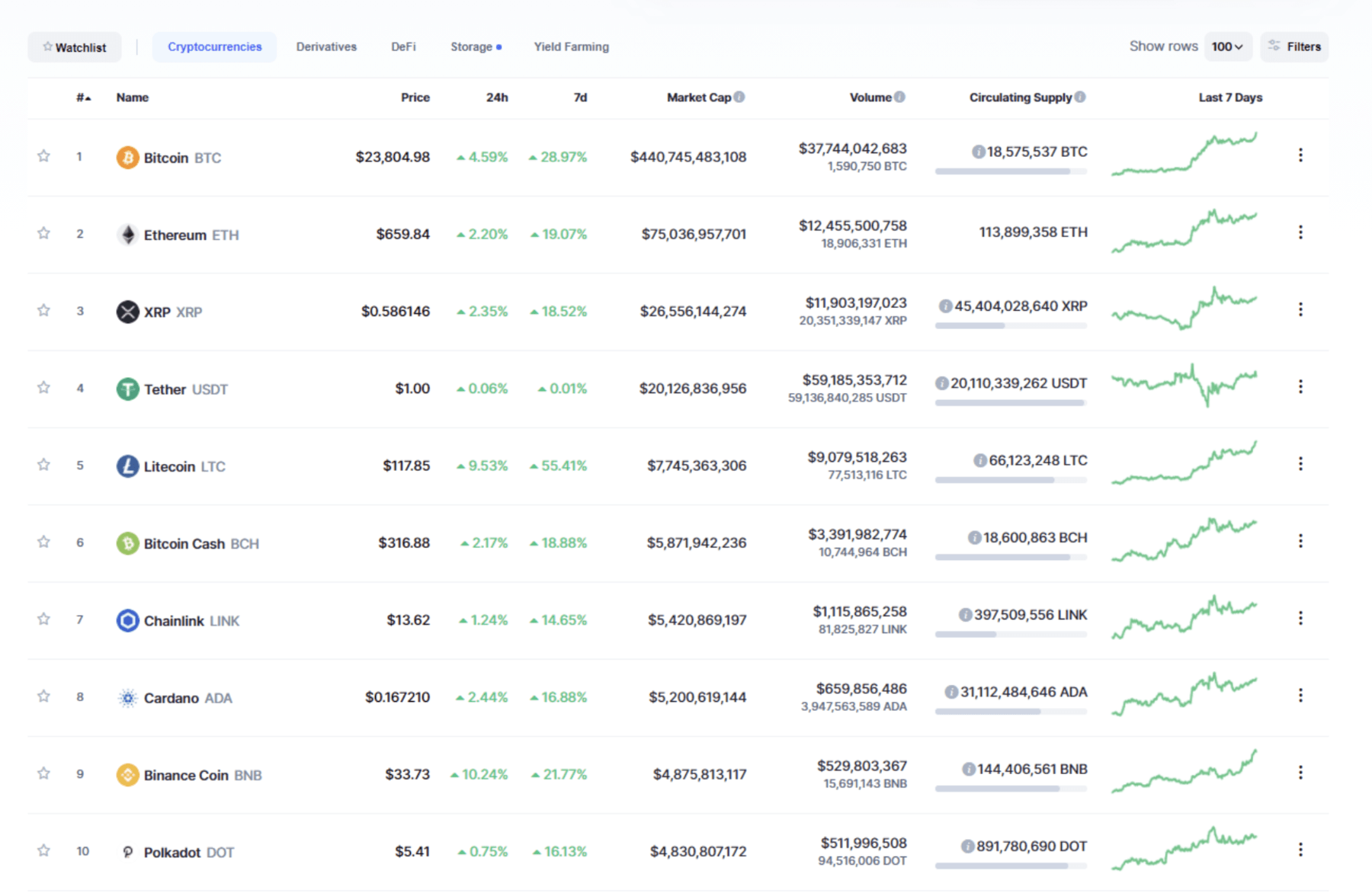 If it is true that history repeats itself, the proposed rule should have negatively impacted the broader cryptocurrency market and triggered a bullish sentiment until the market made sense of the rule.

However, this time the opposite was true. Mainly because there was no element of surprise.

Coinbase founder and CEO Brian Armstrong sent a series of tweets more than three weeks ago alerting the crypto world of the rules that were yet to come.

He warned that the Secretary of the United States Treasury Steven Mnuchin was planning to rush enacting new regulation on self custody wallets before the expiration of his term.

Last week we heard rumors that the U.S. Treasury and Secretary Mnuchin were planning to rush out some new regulation regarding self-hosted crypto wallets before the end of his term. I’m concerned that this would have unintended side effects, and wanted to share those concerns.

Jeremy Allaire, the CEO of Circle, a company with a stablecoin partnership with Coinbase, wrote a letter to the U.S. Treasury speaking against the rumored rules that could “plug a hole” by “constraining how financial intermediaries can interact with public blockchain networks, via so-called unhosted or self-hosted wallets.”

The proposed rule requires daily transactions equal to or greater than $10,000 need to be reported by financial institutions.

Some experts argue that this rule is similar to the travel rule put in place by the Financial Action Task Force (FATF).

Given that the proposed rule may not be as draconian as initially speculated, and the fact that the market had enough to process the anticipated rules, there is a high possibility that the market was already prepared for this.

The proposed rule did not have enough venom to affect the crypto market as it could have done if the situation was handled differently.