Today marks exactly 3 years after bitcoin hit an all-time-high (ATH) of nearly $20,000 in 2017. While a prolonged bear market followed shortly and saw the leading digital asset tank to less than $4,000 by the end of 2018, bitcoin set new records as its price first broke the $20,000 resistance level a day before surging past the historic $23,000 mark.

The 2017 bitcoin bull run, which many called a bubble, was largely driven by retail investors.

At the time of writing, bitcoin is trading at $23,191on Luxembourg-based exchange Bitstamp. Bitcoin’s run to a record high is buoyed by institutional investors who see the asset as a haven for quick gains and can act as a hedge against inflation and global events. 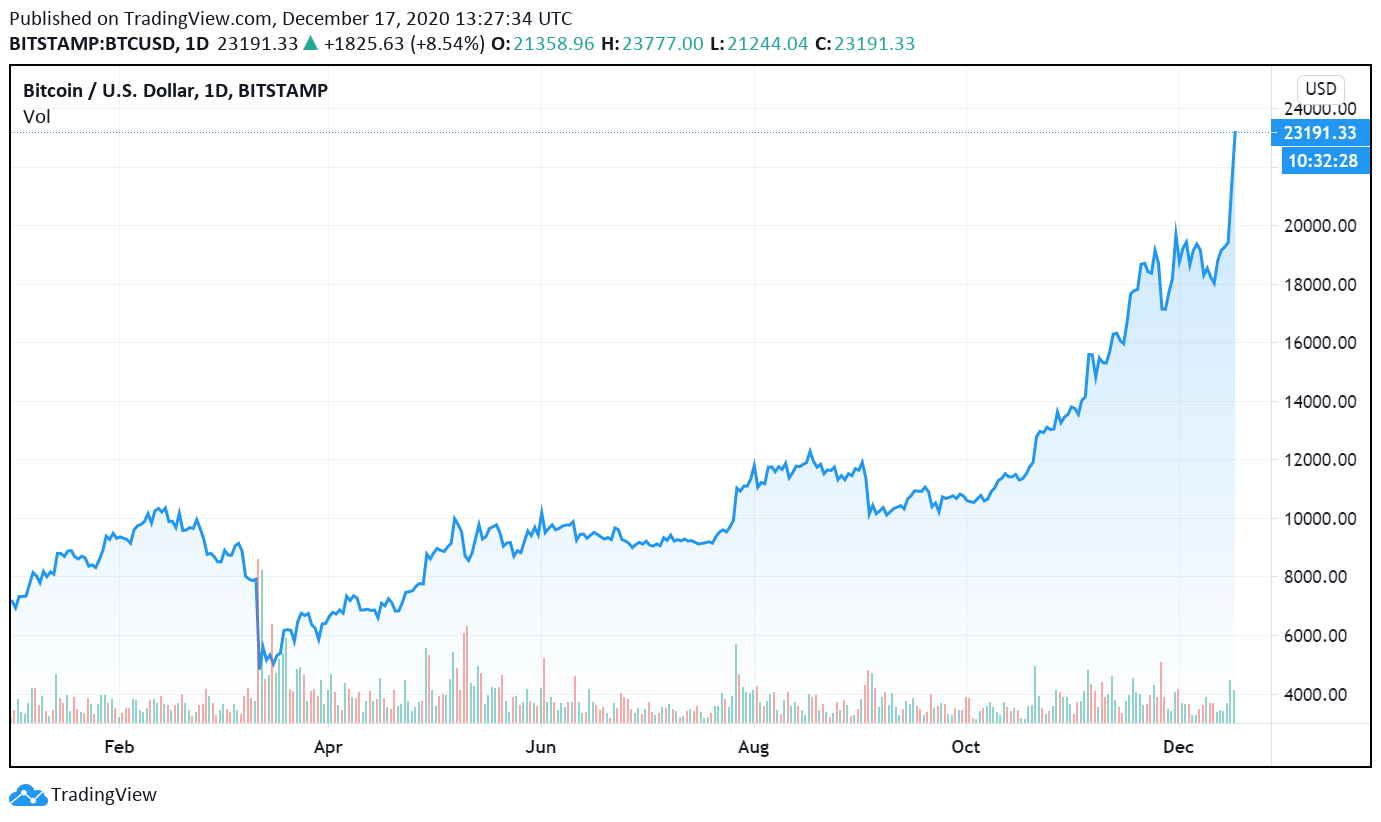 Bitcoin has a hard cap of 21 million and its scarcity quality makes it an attractive alternative for investors who are watching central banks and governments turn on the money printer to stimulate the economy that has been pushed into a recession by the ongoing coronavirus pandemic.

Ruffer’s Multi-Strategies Fund which recently exposed its treasury to bitcoin highlighted that they purchased the digital asset as an insurance policy against the devaluation of major currencies.

Bitcoin is pushing itself from being a topic only spoken in alleyways to a financial asset that big investment firms such as MicroStrategy and famed investors that include Paul Tudor Jones and Stanley Druckenmiller have bought or praised.

Strategists at multinational investment firm J.P. Morgan recently claimed that increased interest in bitcoin by institutional interest will see more money flowing into the cryptocurrency market at the expense of gold, which has been traditionally perceived as the ultimate safe-haven asset.

Where bitcoin goes from here is anyone’s guess. Scott Minerd, the Global Chief Investment Officer of investment firm Guggenheim Investments which manages $275 billion in assets, said bitcoin should be valued at around $400,000.

“Our fundamental work shows that Bitcoin should be worth about $400,000,” says Guggenheim’s Scott Minerd https://t.co/9QyOWyYAVA pic.twitter.com/uojQqaKPia

Some analysts and investors have previously made lofty predictions about bitcoin’s price that didn’t come true.

Ethereum, whose price swings move in tandem with bitcoin, has piggybacked on the leading digital asset’s bullish sentiment to trade at over $660. Ethereum last traded in this range in May 2018.

The second-largest digital asset by market capitalization, which is considered to be the silver to bitcoin’s gold, is up more than 11% in the last 24 hours.

In year-to-date (YTD) performance, Ether has outperformed bitcoin with gains of 410% compared to BTC’s 221%. 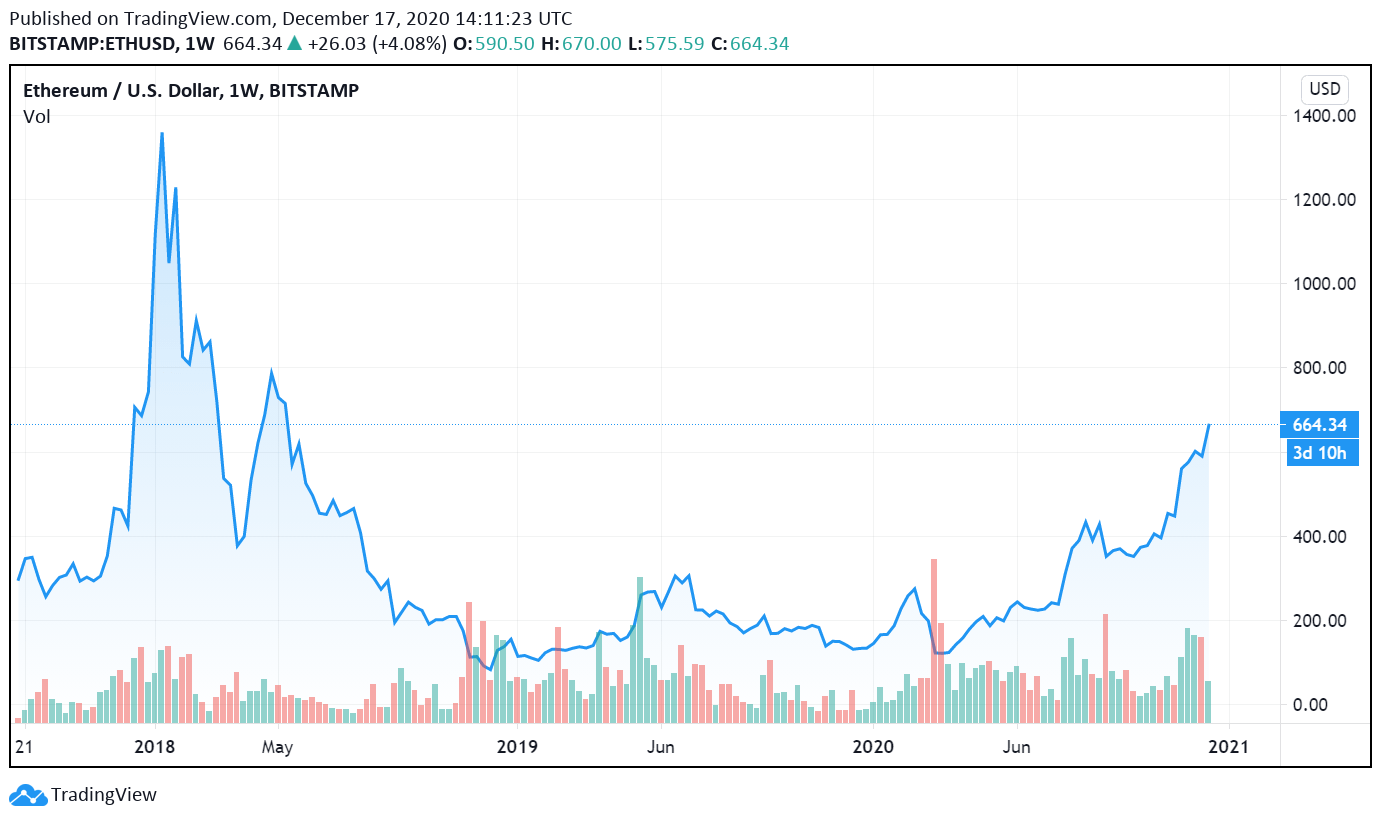 Some of the leading digital assets have also posted impressive gains in the last 24 hours, thanks to bitcoin. Chainlink, Cardano, Polkadot, and Bitcoin Cash are up more than 9%. XRP and Litecoin are respectively trading 29% and 22% higher than they did 24 hours ago. 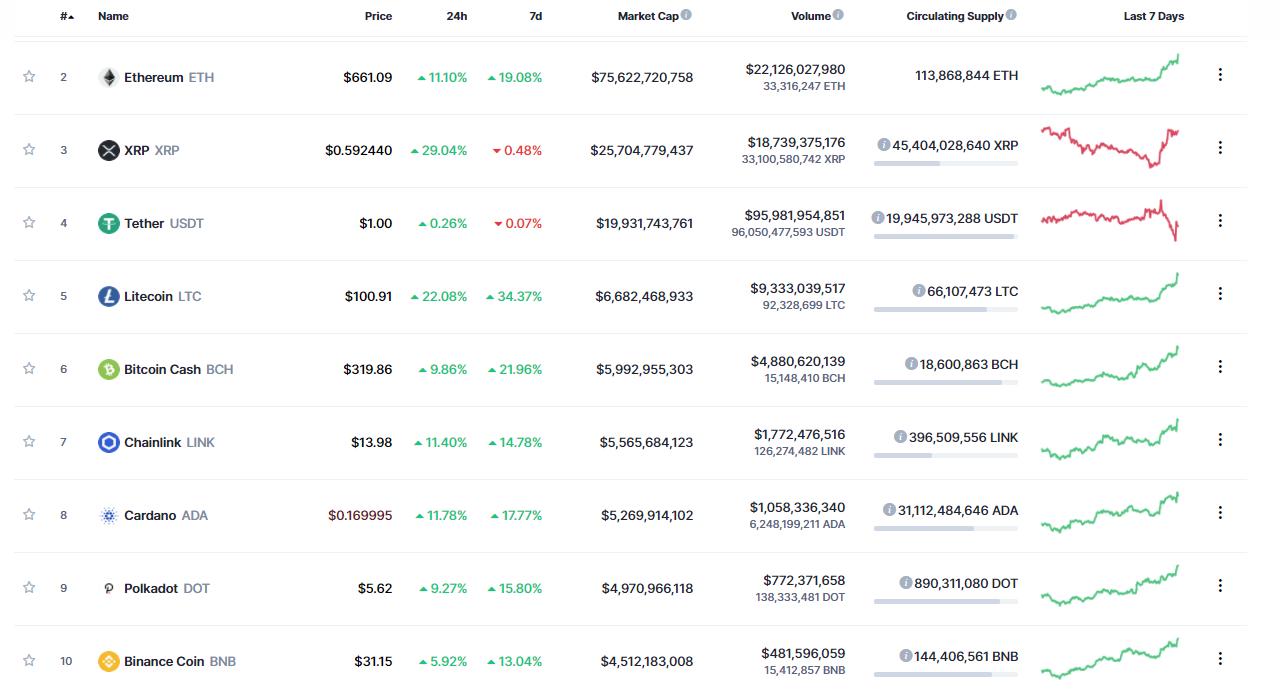 U.S. rock band ‘Kings of Leon’ to release a new album as an NFT